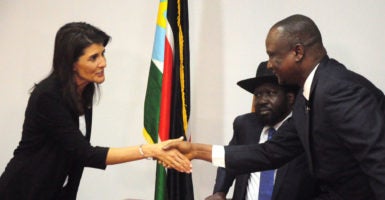 She was responding to a journalist’s question about whether substantive U.S. action would back her warning to South Sudanese President Salva Kiir to stop his armed forces’ many outrages against the South Sudanese people.

Haley made it clear that her primary mission in South Sudan was to tell Kiir that U.S. patience with his empty promises of peace is finished, and that “the time for action is now.”

The journalist’s question was eminently fair. From the start of the South Sudanese civil war in 2013, a string of senior officials—including then-Secretary of State John Kerry and then-national security adviser Susan Rice—remonstrated with Kiir and the opposition forces over the famine, mass atrocities, ethnic cleansing, and refugees their indiscriminate violence produced.

This was in addition to the nearly 80 official statements of lamentation and warning that the State Department and White House fired off at the combatants over the course of three years.

Yet the Obama administration failed to substantively follow through on its many threats. It sanctioned three midlevel officials from each side.

After years of warnings about pursuing an arms embargo on South Sudan, it went to the U.N. Security Council in 2016 to get one. The measure was defeated, eliciting public chortles from the South Sudanese government over the U.S.’ impotence.

The Obama administration’s approach to South Sudan may have resulted from dread that tough action would jeopardize the internationally supported peace process led by a regional body, the Intergovernmental Authority on Development.

If that was the case, it was a bit like a doctor afraid of causing harm to an already dead patient.

The Intergovernmental Authority on Development’s process produced a cavalcade of peace agreements, frequently signed to international acclaim and leavened with stern warnings to the parties to abide by the agreements. The warring parties failed to respect for more than a few weeks any of the at least 11 agreements they signed.

Kiir manipulated the previous U.S. administration by repeatedly dangling the promise of a diplomatic solution to the violence, thereby forestalling any action by the international community that might have compelled the warring parties to seek genuine peace.

Kiir used the breathing room he carved out with his years of successful duplicity to execute a scorched-earth strategy in an attempt to subdue South Sudan. He did this all while blithely denying any responsibility for the catastrophe he and others have brought down on the South Sudanese people.

The lessons for the Trump administration are clear. Kiir and his inner circle are not honest interlocutors for peace, and no one should believe their promises.

In the current context, reviving—as some have suggested the international community do—the miscarried Intergovernmental Authority on Development process is a mistake.

Treating Kiir’s regime, one of the primary drivers of the violence, as part of the solution is counterproductive, as it imbues him with a certain legitimacy and distracts the international community from seeking out other people or movements committed to peace.

Instead, the U.S. should switch to a policy focused on compelling Kiir to see peace as in his best interest. That means pressuring him personally, as he does not care about harm that befalls his people.

Fortunately, the U.S. has unused levers of influence. It should rally the international community to freeze and seize the wealth that Kiir, his cronies, and their families looted from South Sudan, and which some of them flaunt in garish style abroad.

The U.S. should also renew the push for an arms embargo and officially investigate South Sudanese corruption.

The U.S. should likewise move to isolate Kiir and his regime by cutting diplomatic ties with the government of South Sudan. That would include refusing to meet any longer with Kiir or his officials unless he makes substantive changes, such as ensuring unfettered access for humanitarian aid and imposing a meaningful cease-fire.

The other benefit to finally getting tough with Kiir is that it will help the U.S. claw back some of the credibility it has lost over the years with its hollow warnings.

There will be a time in South Sudan when the environment is more conducive to peace and when the U.S. has a chance to facilitate a resolution. When that moment comes, all sides will need to believe what the U.S. says, something they likely do not do currently.

Haley was right to tell Kiir he has no more chances left with the U.S., but he has heard all the tough American talk before. He will inevitably flout this latest warning, testing the administration’s resolve to hold him accountable.

Early, welcome signs are that the administration will do just that, giving it a chance to hasten an end to a war that has damaged U.S. credibility in the region and created one of the worst humanitarian crises on the planet.