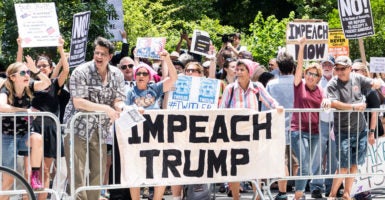 Liberal billionaire Tom Steyer recently announced that he will be spending about $10 million on an ad campaign for Congress to impeach President Donald Trump.

On top of the violation of many progressive policy goals, Steyer said that Trump should be removed from office because “people in Congress and his own administration know that this president is a clear and present danger who is mentally unstable and armed with nuclear weapons.”

Steyer said in one of these commercials that Trump “brought us to the brink of nuclear war, obstructed justice at the FBI, and in direct violation of the Constitution, he’s taken money from foreign governments and threatened to shut down news organizations that report the truth.”

Steyer may just be using the impeachment campaign for publicity to run for office, but he’s tapping into the feelings of a larger movement.

Progressives are hoping that some kind of deus ex machina, some out-of-the-blue miracle, will bail them out of the Trump presidency.

So they’ve cooked up half-baked resignation scenarios, divined obscure constitutional solutions, and have even called for what amounts to a military coup.

Actress Chelsea Handler actually suggested on Twitter that the “generals” should overthrow Trump.

To all the generals surrounding our idiot-in-chief…the longer U wait to remove him, the longer UR name will appear negatively in history.

It’s not really worth analyzing how using banana republic-style solutions will prevent authoritarianism, as there doesn’t seem to be much ardor for this solution. And anyway, some are saying the presence of generals in the Trump administration is the reason he should be deposed.

Yet it’s not just anonymous Twitter activists and uninformed celebrities who are concocting these wild theories. It’s prominent members of the intellectual left.

Cass Sunstein, former President Barack Obama’s drug czar and another Harvard professor, recently released a book making the case for a more expansive reading of the impeachment clauses of the Constitution that extends beyond “high crimes and misdemeanors.”

As with much of Sunstein’s work, he combines the outward appearance of adherence to the Constitution while insinuating that the Founders just couldn’t understand the issues of our day.

“Once we combine party loyalties with the Constitution’s procedure, it becomes reasonable to fear that a tyrant won’t be booted out of office,” Sunstein wrote in a Bloomberg editorial. “For all their prescience, the Constitution’s founders did not quite foresee the problem. That’s worth worrying about.”

While Sunstein has denied that the work is specifically about Trump, it is clear he is attempting to create the illusion of being an objective observer while fueling the partisan fire of finding some justification for deposing the president.

In a recent editorial, Harvard University professor Lawrence Lessig developed a complicated scenario about how Trump would be forced out of office—presumably being impeached—over the Russia investigation.

While most Trump impeachment scenarios end—to their purveyor’s chagrin—with the United States having a President Mike Pence, Lessig seemingly found a way around this complication.

Instead of Trump being replaced by Pence, Pence would resign as vice president, and House Speaker Paul Ryan, who is the third in line to the presidency, would for some reason appoint former Secretary of State Hillary Clinton as his own vice president under the rules of the 25th Amendment.

Finally, to complete this wild ride, Ryan would magnanimously step down, making Clinton the new president.

A piece in Newsweek actually took this seriously, and said of Lessig’s idea, “There’s still one very narrow, highly unlikely, and entirely unprecedented way that Clinton could become president. And it has some Democratic die-hards dreaming again.”

Lessig hasn’t been the only professor, or even the only Harvard professor, to suggest Trump be removed from office for and by absurd reasons.

And Laurence Tribe, one of the most frequently cited law professors in the country, actually suggested that impeachment proceeding should have started on the day of Trump’s inauguration.

Tribe also said, just weeks after the inauguration, that Trump was the most tyrannical president in American history.

“[Trump] must be impeached for abusing his power and shredding the Constitution more monstrously than any other president in American history,” Tribe said.

But impeachment hasn’t been the only scenario the left has concocted for giving Trump the boot.

Eric Posner, a University of Chicago Law School professor, suggested using more obscure language in the 25th Amendment to fire Trump. The Constitution allows the Cabinet, with the approval of Congress, to elect to remove the president from official capacity if he is “unable to discharge the powers and duties of his office.”

This process would require a two-thirds approval from Congress, the same vote count for impeachment.

This would certainly be an extreme move using the language of a law that has never been tested. As Chris Geidner wrote for BuzzFeed:

Should any vice president actually invoke section four of the 25th Amendment, he or she would be the first—and in taking that unprecedented step, that vice president would answer for the first time one of America’s still largely unanswered questions.

So You’re Saying There’s a Chance? Not Really.

Congress certainly has the power to remove the president under Article I, Section 3 of the Constitution. What constitutes “high crimes and misdemeanors” under this law has never been established, but many have suggested that the definition is quite broad.

So, ultimately, the issue boils down to the simple political willingness of members of Congress to carry out the act, and how convinced the public is of both the seriousness of the charges and the urgency of the need to remove the commander in chief.

This move to impeach would be untrodden ground in the history of our republic. Only two presidents, Andrew Johnson and Bill Clinton, have been impeached, and they were never convicted, so they stayed in office.

Johnson was charged with violating the Tenure of Office Act, but escaped impeachment by one vote. While Johnson was generally considered a poor president who warred with his own party and made numerous missteps in dealing with reconstruction following the Civil War, there was still trepidation over taking such an extreme approach.

The Tenure of Office Act was later declared unconstitutional by the Supreme Court, but there were at least serious questions at the time about whether the president had done something illegal.

In the 1990s, Clinton was charged with lying under oath and obstructing justice—serious accusations that nevertheless ended in acquittal, even with Republican majorities in Congress.

At the time, the left, including Tribe, were completely dismissive of any attempts to impeach a president except under the most extreme circumstances.

Today’s calls for Trump’s removal have had scant justification beyond the simple dislike of the president’s attitude, behavior, and policies.

While it is technically possible to remove a president on even these grounds, it would be a hard sell to the American people unless there is a more concrete charge of criminal behavior.

This is a fairly high bar. And with Republican majorities in both houses of Congress, it seems unlikely impeachment would ever succeed.

But that doesn’t stop the left from looking for some way, any way, to depose the constitutionally elected president.

If progressives really want to boot Trump, they should try the more traditional method: win elections. It’s not a stretch to say that impeachment hysteria isn’t helping on that front.