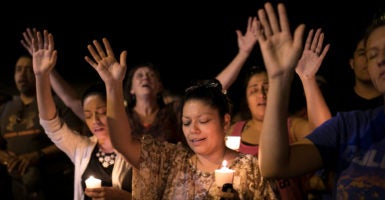 A candlelight service is held in Sutherland Springs, Texas, for the victims of the First Baptist Church shooting. (Photo: Jay Janner/TNS/Newscom)

The Southern Baptist Convention showed sorrow and strength over the tragedy that befell one of its churches in Sutherland Springs, Texas, on Sunday.

According to CNN, members of the First Baptist Church were shot and killed by Devin Kelley over a “domestic situation” with his in-laws. Leaders of the convention expressed sympathy for the victims of one of the deadliest church shootings in American history.

Russell Moore, president of the Ethics & Religious Liberty Commission of the Southern Baptist Convention, wrote an article about the incident in The Washington Post. In it, he said plans made by forces to destroy the Christian faith are only making it stronger.

“The days ahead will be awful for the grieving community of Sutherland Springs,” Moore wrote. “But one thing is certain: Come Sunday, they will be gathered again, singing and praying and opening the Word. That church will bear witness to the truth that shaped them: Eternal life cannot be overcome by death. And over that church will be a cross.”

Moore referenced Jesus’ death, and how his punishment on the cross was meant to silence his followers. But instead, they came out of hiding and made the faith stronger than ever before.

But Ledbetter stressed that death is not the end for the victims or for the rest of the world.

“The believers killed on Nov. 5 were at church because they were expressing a heavenly hope that death is defeated by resurrection,” he said. “Jesus is the proof and the first fruits of those who would rise after Him.”

Ledbetter also cautioned readers not to treat politics as the main source of hope for ending evil.

“Human, political answers have the same expiration date as this world—sooner every minute,” he said. “Those who look for laws or psychology or even first responders for answers to the darkness are not looking to the source of true hope.”

For Ledbetter, that hope is Christ.

“Implicit, and very explicit, in our comfort, however,” he said, “is that promise that Jesus has gone to prepare a place for us so that where He is, we may be also. It’s a place where there is no darkness, no grief, no sin. Come quickly, Lord Jesus.”