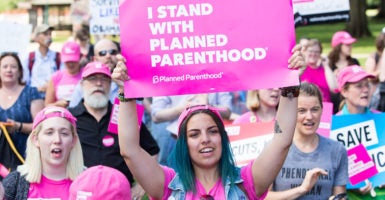 Demonstrators cheer at a protest against "Trumpcare" held by Planned Parenthood and the National Organization for Women on Capitol Hill in Washington, D.C., July 26, 2017. (Photo: ERIN SCHAFF/UPI/ Newscom)

Washington state public schools are considering adopting a Planned Parenthood sex education program that already operates in four other states and is looking to go national.

The Human Growth and Development Citizen Advisory Committee for Spokane, Washington, is considering using the abortion giant’s “Get Real” program, which will head to the school board as well as Spokane district staff to be approved if it gets an OK from the advisory committee, according to KXLY News.

While some community members have expressed support for the program, others are not so sure. “Spokane, you know, we are a wonderful community that is very family-oriented, we need to do it in a way that actually teaches to who this community is,” mother Joanna Hyatt whose two children will soon be attending Spokane public school told KXLY. A sexual educator herself, Hyatt doesn’t oppose sex education but doesn’t agree with the way [“Get Real”] teaches information to kids.

“This program does meet … the state standards. what it doesn’t meet is the local standards,” John Repsold, a Spokane pastor, also told the outlet.

Hyatt and others have proposed several options for the school board to consider instead, including presenting [“Get Real”] along with another program that parents can choose between. Parents currently have the option to opt their kids out of any sex ed programs at the school, but the Planned Parenthood proposal would make [“Get Real”] mandatory for all public school children in the district.

As of 2014, “Get Real” was taught in 150 schools in Massachusetts, New York, Rhode Island, and Texas, according to Time Magazine. Planned Parenthood hopes to the take the program nationwide and expand to  conservative states especially.

Spokane’s consideration of the program comes after the program was set to begin at nine Cumberland County, North Carolina, middle schools but was halted after parents loudly complained. “I just don’t think that’s appropriate for a 12-year-old, whether it be a boy or a girl, to be teaching them that,” parent Nick Quello told WRAL in October.

Spokane’s Planned Parenthood did not respond to The Daily Caller News Foundation’s request for comment in time for publication.