School Discipline Policy Belongs at the Local Level, Not Washington 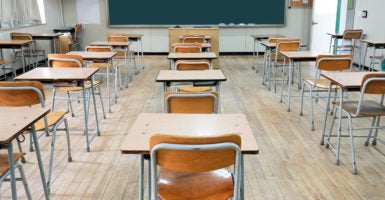 Teacher unions and progressive special-interest groups cried foul earlier this year when the White House suggested that federal directives on school safety could be rescinded.

But if a recent hearing held by the Federal Commission on School Safety is any indication, state and local policymakers don’t need Washington to micromanage student discipline policies. These state and community leaders’ testimonies indicate they are acting on their own to try and make students and schools safer.

In 2014, the Obama administration’s departments of Education and Justice issued a “Dear Colleague” letter to public schools that contained specific instructions on how schools should deal with school safety and student discipline. The letter says schools should limit student engagement with law enforcement and says suspensions and expulsions (exclusionary discipline) should only be used as a last resort.

The agencies also said school personnel should sign a memorandum of agreement with local law enforcement indicating that all involved will try to limit exclusionary discipline.

The letter has attracted public attention after the tragic events of Feb. 14 in Broward County, Florida. The gunman that took the lives of 17 students and adults at Marjory Stoneman Douglas High School had been subject to disciplinary rules that mirror the federal letter.

In fact, Broward County’s so-called PROMISE program predated and inspired the federal Dear Colleague letter. The gunman had been referred to the PROMISE program, but officials have no record of what was done to help the troubled youth.

Experts from The Heritage Foundation and Wisconsin Institute for Law and Liberty explained the issues surrounding the legality of the letter, issues that warrant rescinding the letter on their own. Namely, the letter violates provisions of the Congressional Review Act and the Administrative Procedure Act pertaining to the review of federal regulations.

But there are also surveys and other empirical evidence that questions the efficacy of limiting suspensions and expulsions.

The responses were similar in the 2018 version of the same poll. Respondents opposed these policies at both the school district and federal levels.

Those in favor of limiting exclusionary discipline cite evidence that minority students are suspended at higher rates than their peers. They argue that teachers and school personnel may be discriminating against minority students.

Yet researchers say “the evidence is inconclusive as to whether or not these disparate practices involve racial bias and discrimination.”

In a summary of the research, Matthew Steinberg of the University of Pennsylvania told Education Next:

Particularly in urban schooling contexts, we know that residential location, particularly for minority students, means that these students are coming from neighborhoods with higher crime rates, higher poverty … and what we are doing is sorting these students into the same schools and really concentrating disadvantage and therefore likely concentrating behavioral issues within the same school, and, as a result we may be seeing higher rates of school discipline.

Steinberg also says the research suggests “we really need to think about targeted responses [regarding school discipline] at the school level.”

Still, large school districts around the U.S. are following the provisions in the federal letter, including Los Angeles, Oklahoma City, Seattle, and Philadelphia.

Alabama Gov. Kay Ivey told the safety commission this week that “each school has unique security needs and local districts must be given an opportunity to assess their own security requirements.” Experts on information technology, mental health, school counseling, and school resource officers testified about the decisions being made at the state and local levels to make schools safer.