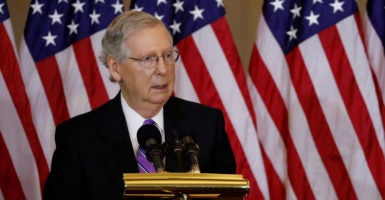 Majority Leader Mitch McConnell served notice late last week that the Senate will consider four of President Donald Trump’s nominees to federal circuit courts, the powerful appeals panels that give the final word on the overwhelming majority of cases in U.S. courts.

Larsen was among 21 candidates included on Trump’s list of possible Supreme Court nominees during the 2016 presidential election. She is widely seen as a front-runner for the president’s next appointment to the high court.

“President Trump has done a terrific job of nominating judges who are already helping to restore the courts to their intended function in our system of government,” McConnell said. “The nominees we will consider next week are sure to do the same.”

Two of the nominees, Barrett and Bibas, were subjected to intense criticism by Senate Democrats.

During Barrett’s confirmation hearing Sept. 6, several Democrats on the Judiciary Committee suggested that her orthodox religious views would preclude her from effectively discharging her judicial duties. Barrett, a Roman Catholic, has produced scholarship concerning the ethical obligations of Catholic judges.

Sen. Dianne Feinstein of California, the ranking Democrat on the Judiciary Committee, argued that Barrett’s writings betray a rigid religious ideologue ill-suited for a judicial post.

“When you read your speeches, the conclusion one draws is that the dogma lives loudly within you,” Feinstein said. “And that’s of concern when you come to big issues that large numbers of people have fought for for years in this country.”

Two other Democrats, Sens. Dick Durbin of Illinois and Mazie Hirono of Hawaii, reiterated her concerns.

Feinstein’s remarks, first reported by The Daily Caller News Foundation, were roundly condemned by the U.S. Conference of Catholic Bishops, while something of a pro-Barrett cottage industry has promoted novelty items supporting her confirmation.

“Amy Barrett happens to be a nominee who is a Catholic, and who speaks freely and openly about her faith and its importance to her,” McConnell said. “For some on the left, that seems to be a disqualifying factor for her nomination.”

The Senate majority leader added that he expects Barrett will be confirmed as soon as Monday.

Bibas has disavowed what he characterizes as an ill-advised thought experiment, and is widely seen as a thoughtful scholar by criminal justice experts across the political spectrum.

“Please, before you vote to give this professor a lifetime appointment to the second-highest court in the land, read what he has written and ask yourself the honest question, Democrat or Republican,” he said. “Seriously? Are we going to vote this man into this position?”

The confirmation votes may go some distance in soothing conservative anxieties about the sluggish pace of judicial confirmations in the early months of the Trump administration.

>>> Commentary: Why Trump’s Appeals Court Nominees Are Backed Up in the Senate

Though the president has named some 50 judicial nominees since taking office Jan. 20, the Senate has confirmed just seven thus far, including Supreme Court Justice Neil Gorsuch. Currently, 150 vacancies exist across the federal courts, according to the Judicial Conference of the United States.

Elizabeth Slattery, a legal fellow at The Heritage Foundation who writes frequently about judicial confirmations and the Supreme Court, called McConnell’s actions encouraging. But Slattery cautioned that Senate Republicans should move at a faster clip, given the scale of the vacancies.

“It’s encouraging to see Majority Leader McConnell follow through on his promise to make judicial nominations a top priority,” she said, adding:

These four individuals will be excellent additions to the federal bench. But other nominees, like [Minnesota Supreme Court Justice] David Stras [for the 8th Circuit], are still waiting for a hearing. There’s a lot of work to be done to fill the more than 150 vacancies on our federal courts.

Trump nominated Barrett, Bibas, Eid, and Larsen for vacancies in states with at least one Democratic senator.

Though those Democrats allowed their nominations to proceed by returning “blue slips” to the Judiciary Committee, it isn’t clear whether any of the candidates will win significant support from Democrats.

All four nominees are expected to win confirmation.