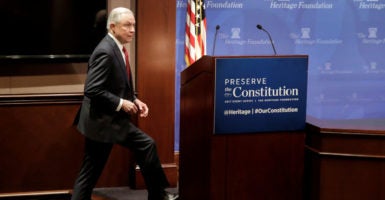 “Our freedom to worship and speak our minds [is] at the core of what it means to be free,” Attorney General Jeff Sessions says at The Heritage Foundation Thursday. (Photo: Yuri Gripas/Reuters/Newscom)

Attorney General Jeff Sessions spoke about the accomplishments of the Justice Department and its new direction in a speech at The Heritage Foundation on Thursday.

Sessions discussed the long tradition of the rule of law in America and how it has been so critical to our success as a nation. He called this tradition “unique and blessed,” and said if people don’t understand it, they are really missing something.

But there are challenges to the rule of law and our freedoms today that must be addressed, according to Sessions.

In particular, Sessions focused on two fundamental liberties—“religious liberty and the freedom of speech”—that need to be protected. He called these the “very first freedoms the Founders put in the Bill of Rights, not by accident.”

“They are first because our freedom to worship and speak our minds [is] at the core of what it means to be free,” Sessions said.

In quoting Founding Father James Madison, Sessions said, “the freedom of speech is the only effectual guardian of every other right.”

And though some people say that “certain speech is not deserving of protection,” according to Sessions, this idea is misguided.

Citing historic public debates, such as the famous debates between Abraham Lincoln and Stephen A. Douglas over slavery before the Civil War, Sessions said protecting speech ultimately makes us better as a country.

“Speech led to better decisions in a more just society,” Sessions said. “Under President [Donald] Trump’s leadership, this department is doing its part to protect that right.”

Sessions pointed out that the Justice Department is working on a couple of cases involving free speech on college campuses and that more will come in upcoming months.

“One of those cases rose when a college student was prevented from proclaiming his Christian faith,” Sessions said. “This is doubly important because this impacts speech and free exercise of religion.”

The Justice Department recently filed a brief on behalf of a student at Georgia Gwinnett College who says the school won’t let him evangelize on campus. The student is being represented by the Alliance Defending Freedom, a religious liberty advocacy group, according to The Chronicle of Higher Education.

In another lawsuit, the Justice Department filed a statement of interest in a case where a Los Angeles Pierce College student was not allowed to distribute copies of the Constitution outside a “free speech area” on campus.

In addition to explaining the top priorities of the Justice Department, Sessions pointed to what he sees as the major accomplishments of the department so far.

First, it ended the practice of third-party settlements that had become a “bankroll to third-party, special-interest groups, or the political friends of whoever is in power.”

The second big issue was ending what Sessions called illegal subsidies to insurance companies under the Obamacare program that had not been appropriated by Congress.

Finally, Sessions mentioned that the Trump administration put an end to the Deferred Action for Childhood Arrivals program, which Sessions said regardless of its policy merit was a violation of our constitutional order. DACA was designed to give legal status to those who came to the country illegally as children.

“A Cabinet secretary is not allowed to effectively wipe off the books whole sections of immigration law duly passed by Congress, especially when Congress considered it and refused to change the law,” Sessions said.

Sessions also spoke about a settlement with tea party groups that were allegedly targeted by the IRS, which was announced on Thursday.

“It should also be without question that our First Amendment prohibits the federal government from treating taxpayers differently based solely on their viewpoint or ideology,” Sessions said. “There is no excuse for this conduct.”

He said the hundreds of organizations affected by these policies “deserve an apology” from the IRS.