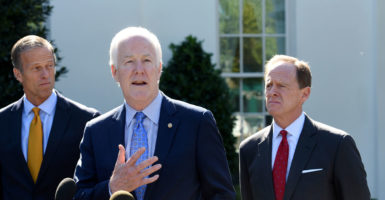 Prominent conservatives are faulting a Republican senator for one of President Donald Trump’s stalled nominations.

In a memo released on Tuesday, the Conservative Action Project blames Sen. John Cornyn, R-Texas, for the stalled nomination of Russ Vought for deputy director of the Office of Management and Budget.

“Cornyn is a member of Republican Senate leadership, and it is his job to aid the president of his own party to confirm qualified nominees,” the memo states.

The memo praises Vought, a former staffer for Vice President Mike Pence when he was still a congressman, and claims that Vought is respected by his peers and has an “unquestioned record of expertise in budget and policy issues.” Vought previously worked for Heritage Action for America, the lobbying affiliate of The Heritage Foundation.

“This behavior by Sen. Cornyn is unbecoming [for] a senator who wants to be the next Republican leader in the Senate and who professes to be a principled conservative,” the memo states.

The memo also brings up that Cornyn, by blocking Vought, is blocking a nominee who was attacked for his Christian views by Sen. Bernie Sanders, I-Vt., at a June confirmation hearing.

“The only answer to such an outright and unconstitutional expression of bigotry is swift confirmation of Vought’s nomination by the Senate,” the memo states. “Yet, by blocking this nomination, Sen. Cornyn is complicit in support of Sen. Sanders’ position by holding Vought’s nomination hostage.”

The memo calls for Cornyn to let Vought through the nomination process and to “once again stand for principle.” The memo was signed by over 80 conservative figures, including Edwin Meese III, who served as attorney general in the Reagan administration and is now the Ronald Reagan distinguished fellow emeritus at The Heritage Foundation.