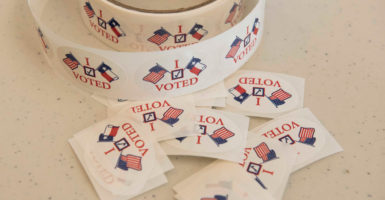 Early voters in South Texas got these stickers in October 2016. The Presidential Advisory Commission on Election Integrity is looking into issues such as voter registration problems, cybersecurity, and voter fraud. (Photo: Bob Daemmrich/Polaris/Newscom)

The presidentially appointed commission raised serious questions about voter registration issues, such as duplicative names. The panel called on sometimes reluctant states to make reforms to ensure the integrity of elections, including sharing registration information with other states.

Those recommendations came in 2014 from the Presidential Commission on Election Administration, whose members were named by President Barack Obama.

The Obama panel’s recommendations, like those of earlier election commissions, for the most part were treated in a bipartisan manner. By contrast, some Democrats and others on the left appear to be prejudging the work of the panel on election integrity convened by President Donald Trump.

“The reactions to this commission have reached hysteria,” Robert Popper, a former Justice Department attorney who studies elections for the conservative group Judicial Watch, told The Daily Signal.

The findings of the Obama panel came nine years after recommendations made by the Commission on Federal Election Reform. Better known as the Carter-Baker commission, that bipartisan panel was co-chaired by former President Jimmy Carter and former Secretary of State James Baker.

That 2005 commission, not a government body, was organized by American University’s Center for Democracy and Election Management, which researches elections and voting. It made what at the time was a nonpartisan suggestion that states adopt voter ID laws.

Voter ID laws require all voters to produce a driver’s license or other photo identification—or in some cases a utility bill as a proof of address—at the polling site in order to vote.

Carter, a Democrat, also served as honorary co-chairman, along with former President Gerald Ford, a Republican, for the 2001 National Commission on Federal Election Reform, which convened after the controversial results of the 2000 presidential race. The day-to-day co-chairmen were a former Republican House member, Bob Michel, and a former Democratic White House counsel, Lloyd Cutler.

Among the 2001 commission’s findings were that inaccurate voter lists undermine public confidence in the election process.

Also not a presidential commission, the Carter-Ford panel was assembled by the University of Virginia’s Miller Center for Public Affairs and the Century Foundation, which researches American history and the presidency.

Lawmakers and the public accepted the findings of these earlier election commissions on a mostly bipartisan basis.

However, after Trump named the Presidential Advisory Commission on Election Integrity, many Democrats and progressive organizations insisted the group would try to advance ways to suppress votes from their constituencies.

The panel’s’ stated mission is to study the registration and voting processes used in federal elections; enhance the public’s confidence in the integrity of these procedures; review laws and practices that undermine public confidence; and address vulnerabilities in the system that could lead to improper voter registrations.

The Brennan Center for Justice at New York University, however, called the commission a “tool for voter suppression.”

Other progressive groups such as the American Civil Liberties Union, Common Cause, Public Citizen, and the League of Women Voters sued to prevent the commission from gathering information. Some states resisted providing voter registration information.

Partisan findings won’t likely be the result of the current panel’s work, said Donald Palmer, a former secretary of Virginia’s Board of Elections, who provided testimony to the current commission and worked with past election-related commissions.

“Some are concerned that this commission will have a singular focus on voter fraud, but I think it will recommend some commonsense election reforms,” Palmer told The Daily Signal. “We’ve had multiple panels in the past, and like those, I think this commission will look at a broad spectrum of issues.”

Besides voter fraud, those issues include cybersecurity and cooperation among states.

Palmer is a fellow with the Bipartisan Policy Center, focusing on helping and advising states on implementing the recommendations of Obama’s Presidential Commission on Election Administration. He previously served as director of elections in Florida.

However, many large states such as California and New York have sat on the sidelines for election reforms, Palmer said. There is merit in this commission and perhaps future commissions, he said, because new concerns can come up after every national election.

“It’s difficult when you have bipartisan recommendations to keep them bipartisan and nonpartisan, if legislatures in states take them up and politicize them,” Palmer said. “ID was nonpartisan and quickly became partisan.”

Hans von Spakovsky, a senior legal fellow with The Heritage Foundation and member of the commission convened by Trump, provided expertise to the Carter-Baker panel. He said he is puzzled by the “hysterical reaction” to the current commission.

“It is unprecedented and undeserved, considering the reaction toward past commissions,” von Spakovsky told The Daily Signal. “This all shows that the criticism is based on politics and ideology and nothing to do with the real issue.”

Some of the attacks could be a fundraising tool for progressive groups, said Popper, former deputy chief of the voting section of the Justice Department’s Civil Rights Division.

“If there is not [as critics say] one nickel’s worth of voter fraud and it has never crossed anyone’s mind, then why not just let the commission do its work and prove that?” Popper, who now directs the election integrity project for Judicial Watch, told The Daily Signal.

“The reactions to this commission have reached hysteria,” he said. “There are a lot of political interests in pushing this narrative.”