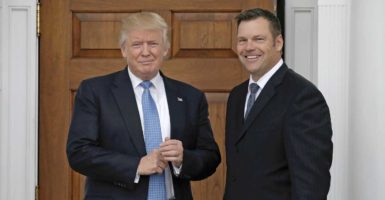 An odd assortment of states are taking varying positions on whether to cooperate with the Trump administration’s investigation into potential voter fraud.

Some red states—whose voters solidly backed the president—are declining to collaborate and some solidly blue states are participating in the investigation.

As of early Thursday, at least 20 states have agreed to provide publicly available voter information to the Presidential Advisory Commission on Election Integrity, according to the National Association of Secretaries of State. Up to 19 states and the District of Columbia have declined to provide voter information, while another nine states are reviewing the decision, according to information from the National Association of Secretaries of State.

Blues state that went to Democrat Hillary Clinton in 2016 such as Rhode Island, Nevada, and Colorado are providing requested information, whereas red states that backed President Donald Trump such as Wyoming and Mississippi aren’t complying

Mississippi’s Republican secretary of state, Delbert Hosemann, said the commission “can go jump in the Gulf of Mexico.”

Trump established the commission through an executive order in May, and it’s made up of a bipartisan group of state election officials, and other election experts. Vice President Mike Pence is the commission’s chairman and Kansas Secretary of State Kris Kobach is the vice chairman. Hans von Spakovsky, a senior legal fellow at The Heritage Foundation, is a member of the commission.

Though investigative in nature, the commission doesn’t have subpoena power, and can’t require states to provide any information.

On June 28, Kobach signed a letter to 49 state election officials that asked the officials to provide all publicly available information permitted under state law for the commission to review.

In the letter, Kobach asked state election officials for the following information:

The letter asks for a response from states by July 14.

A CNN report Tuesday included a headline that 44 states have “refused to give certain voter information to Trump commission.” The report may be misleading, but not entirely untrue, since varying states have different laws. Still the commission’s letter to states specifically requested publicly available information that can be provided consistent with state law.

In other words, states could be cooperating insofar as they are providing the commission with all the voter information they can release legally, yet still not be giving it all due to state laws surrounding voters’ privacy.

Kobach blasted reports in a Wednesday statement that 44 states “refused” to participate as “fake news.”

He said 20 states agreed to provide information and 16 states are reviewing what information to provide. Kobach said in a statement:

While there are news reports that 44 states have ‘refused’ to provide voter information to the commission, these reports are patently false, more ‘fake news.’ At present, only 14 states and the District of Columbia have refused the commission’s request for publicly available voter information. Despite media distortions and obstruction by a handful of state politicians, this bipartisan commission on election integrity will continue its work to gather the facts through public records requests to ensure the integrity of each American’s vote because the public has a right to know.

Kobach’s assertion veers much closer to the information from the National Association of Secretaries of State than the CNN report. The association’s release states that numerous states will provide “partial information,” while others indicate an effort to cooperate but face state law restrictions.

Based on the association’s information, those that have given what’s close to an outright denial to the commission’s request are: California, Delaware, the District of Columbia, Kentucky, Maine, Maryland, Massachusetts, Minnesota, Mississippi, New Mexico, New York, North Dakota, South Dakota, Tennessee, Virginia, and Wyoming.

California Secretary of State Alex Padilla, who oversees elections in the state, said the commission was illegitimate.

“California’s participation would only serve to legitimize the false and already debunked claims of massive voter fraud made by the president, the vice president, and Mr. Kobach,” Padilla said in a statement. “The president’s commission is a waste of taxpayer money and a distraction from the real threats to the integrity of our elections today: aging voting systems and documented Russian interference in our elections.”

Trump lashed out at states in a tweet over the weekend for not cooperating, asking, “What are they trying to hide?”

Numerous states are refusing to give information to the very distinguished VOTER FRAUD PANEL. What are they trying to hide?

States that are reviewing whether to provide some or all information requested are Florida, Hawaii, Idaho, Illinois, Nebraska, South Carolina, Vermont, Washington, and West Virginia, according to the National Association of Secretaries of State.

Other states’ statuses are murky. Arizona declined the specific request over security concerns, but offered to help the commission on different fronts. States such as Georgia and Louisiana say that public information is available for purchase, but not sensitive data.

John Malcolm, director of the Meese Center for Legal and Judicial Studies at The Heritage Foundation, said some of the reporting on the commission has been misleading. When some states are providing as much information as available under state law, “to say they are not cooperating or refusing to cooperate is certainly inaccurate,” Malcolm told The Daily Signal.

Several secretaries of state expressed concerns about sensitive information. Malcolm said that is a worthwhile discussion, but he also said the last four digits of a Social Security number, which Kobach requested, can be useful in such an inquiry.

“It’s important in cross-referencing with other individuals, so you don’t have two people with the same name,” Malcolm said. “There needs to be a discussion. Social Security information can be sensitive.”

He suggested the the commission should request more information, such as court records to show individuals ineligible to serve on a jury because they were not citizens.

Wyoming Secretary of State Ed Murray, a Republican, said, “I believe elections are the responsibility of the states under the United States Constitution and I do believe this request could lead to a federal overreach.”

Malcolm said he didn’t view this as a major concern.