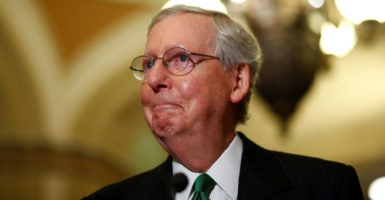 “1,200 nominations are subject to Senate confirmation,” said Caroline Vanvick, deputy communications director to Sen. David Perdue, one of the signers of the letter, in an email with the Daily Signal. “Because of Democratic delays, if we don’t pick up the pace in the Senate, President Trump won’t have his full team in place until after his first term.”

The letter was sent after McConnell, R-Ky., announced at a party lunch on Tuesday that he planned to extend the chamber’s work hours to Fridays and possibly weekends. According to Politico, the schedule was extended to give the Senate the opportunity to approve Trump’s nominees as well as pass tax reform before the end of the year.

The letter proposes an even more vigorous schedule in order “to combat partisan obstruction and get results for the American people,” according to a press release provided by Lesley Fulop, press secretary to Perdue.

This isn’t the first time GOP members have asked McConnell to extend the session time in the Senate.

“In August,” said Perdue in a statement, “we sent a letter to Leader McConnell and asked him to postpone the August state work period so we could confirm more nominees and make progress on agenda items.”

As a result, the Senate approved nearly 70 nominees.

“Now, with 36 legislative days left in the year,” said Perdue, “we have been raising these concerns again and urging Leader McConnell to turn the Senate on full-time so we can get all of our priorities done from the budget, funding the government, and tax this year.”

In the letter, Perdue and the other GOP senators accuse the Senate minority of trying “to imperil the new administration and its agenda,” and emphasize the need for the GOP to take measures to ensure their goals are met.

“Our conference should always remember that we are fighting for hardworking Americans. … We owe them the same unrelenting effort in the job they gave us to do,” the letter ends.

This article has been updated with a new quote from Caroline Vanvick that replaced a quote previously in the article, and to reflect the number of senators who signed the letter.