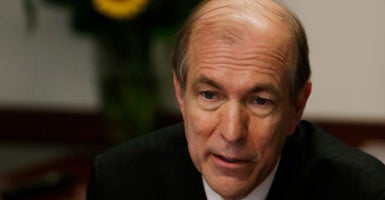 “Mr. Garrett has suffered unfounded criticism from firms that have profited enormously from precisely the special interest decision-making that has cost the Export-Import bank the confidence and respect of many of us in Congress,” reads the letter signed by 26 lawmakers. (Photo: Gary Cameron/Reuters /Newscom)

Republican lawmakers are asking leaders of the Senate Committee on Banking, Housing, and Urban Affairs to confirm President Donald Trump’s nominee to lead the Export-Import Bank.

“We are writing to express our support for President Trump’s nominees to the Export-Import Bank, and especially his nomination of Scott Garrett to be the bank’s next president,” 26 lawmakers wrote in a letter to Chairman Mike Crapo, R-Idaho, and ranking member Sherrod Brown, D-Ohio.

“As former colleagues in the House, we can state unequivocally that Scott Garrett is a principled reformer who will greatly aid the president and his Cabinet to remove corporate cronyism from the federal government,” the letter reads.

Garrett, a Republican who represented New Jersey‘s 5th Congressional district from 2003-2017 and was a founding member of the conservative House Freedom Caucus, was nominated by Trump June 20 to be the bank’s president.

Former Rep. Spencer Bachus, a Republican who represented Alabama’s 6th Congressional District from 1993 to 2015, was also nominated by Trump to sit on the Export-Import Bank’s board.

Conservatives have been critical of the Export-Import Bank. “Ex-Im opponents believe the bank is an engine of cronyism and corporate welfare, and say that the bank’s financing benefits a small handful of large corporations, such as Boeing, General Electric, and Caterpillar,” The Daily Signal previously reported.

The letter highlights problems the lawmakers have with the bank and underscores their confidence that Garrett will be the solution to the problem.

Mr. Garrett has suffered unfounded criticism from firms that have profited enormously from precisely the special interest decision-making that has cost the Export-Import Bank the confidence and respect of many of us in Congress.

As of 2015, the Export-Import Bank has had 800 fraud claims levied against it. The bank’s policies have also brought about 85 indictments, criminal convictions, and 66 years of prison sentences. We believe cronyism is the disease and Mr. Garrett is the cure.

Diane Katz, a senior research fellow at The Heritage Foundation who specializes in regulatory policy, said Garrett’s presence in the organization would be a step in the right direction.

“Although it would be far better to shut down the bank entirely, Scott Garrett recognizes that Ex-Im is in need of fundamental reform,” Katz said in an email to The Daily Signal. “Those who most vigorously oppose him are crony multinational corporations that believe they are entitled to taxpayer subsidies for their exports.”

The lawmakers wrote that they want to see action so further reforms to the Export-Import Bank can be put in place.

“We would urge that all of President Trump’s nominees to the Export-Import Bank be voted on by the committee as a bloc in order to carry out the president’s vision of reforms,” the letter reads.