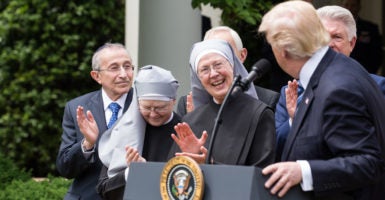 President Donald Trump invited nuns from the Little Sisters of the Poor charity onstage as he spoke with Rabbi Marvin Hier, Cardinal Donald Wuerl, and Pastor Jack Graham during a religious freedom executive order signing ceremony on May 4 in the Rose Garden. (Photo: Cheriss May/Sipa USA/Newscom)

The Trump administration came out strongly in defense of religious freedom Friday, with new legal guidance and a move to reverse one of the most controversial Obamacare mandates.

“Every American has a right to believe, worship, and exercise their faith,” Jeff Sessions says.

The Department of Health and Human Services is rolling back the Obamacare mandate that employers cover contraception and abortion-inducing drugs, creating both a religious and moral exemption. This will expand the number of covered nonprofits and nonpublicly traded for-profit businesses.

“The president believes the freedom to practice one’s faith is a fundamental right in this country,” White House press secretary Sarah Huckabee Sanders told reporters Friday. “That’s all this is and that’s all that today was about. Our federal government should always protect that right and as long as Donald Trump is president, it will. … This is a president who supports the First Amendment, who supports the freedom of religion. I don’t understand why that would be an issue.”

In both cases, the departments are following up on President Donald Trump’s directive that was part of a May 4 executive order on religious freedom.

“Our freedom as citizens has always been inextricably linked with our religious freedom as a people. It has protected both the freedom to worship and the freedom not to believe,” Attorney General Jeff Sessions said in a statement. “Every American has a right to believe, worship, and exercise their faith. The protections for this right, enshrined in our Constitution and laws, serve to declare and protect this important part of our heritage.”

Trump’s executive order directed the attorney general to “issue guidance interpreting religious liberty protections in federal law” in order “to guide all agencies in complying with relevant federal law.” In response, Sessions issued 20 “high-level principles” that federal agencies will follow. The guidelines don’t represent a new policy, but are based on more than 200 existing statutes and 158 existing regulations. These include the 1993 Religious Freedom Restoration Act and the 1964 Civil Rights Act.

Among the principles are that “Americans do not give up their freedom of religion by participating in society or the economy, or interacting with government;” “Religious employers are entitled to employ only persons whose beliefs and conduct are consistent with the employers’ religious precepts;” and “Generally, the federal government may not condition federal grants or contracts on the religious organization altering its religious character, beliefs, or activities. Implementation of the Guidance at the Department of Justice.”

“The constitutional protection of religious beliefs and the right to exercise those beliefs have served this country well, have made us one of the most tolerant countries in the world, and have also helped make us the freest and most generous,” Sessions said.

The Obama administration carried out a “relentless assault on the First Amendment” and promoted “anti-faith policies,” said Tony Perkins, president of the Family Research Council, a social conservative think tank.

“President Trump and the Department of Justice are putting federal government agencies on notice: you will not only respect the freedom of every American to believe but live according to those beliefs,” Perkins said in a statement Friday. “This is a freedom that has been a fundamental part of our society since the beginning of our nation.”

The new policy under Trump offers a separate religious and a moral exemption. The religious exemption would cover a religious-affiliated nonprofit employer, such as a church, school or charity. The moral exemption would be available to employers that have moral opposition to providing contraception or abortion-inducing medication for employees, including a nonpublicly traded company, or a nonprofit even if it doesn’t have a religious affiliation.

Already there are 200 entities suing the federal government in 50 difference lawsuits opposing the mandate, according to HHS.

However, the liberal group Americans United for Separation of Church and State announced plans to sue the Trump administration over the new HHS rules.

“The Trump administration is carrying out the agenda of religious fundamentalists, the biggest part of the president’s remaining devoted supporters,” said Maggie Garrett, Americans United’s legislative director, in a statement Friday. “The rights of LGBTQ people, women, religious minorities, nontheists and others hang in the balance as the Trump administration continues to toe the line for its fundamentalist base.”

The Obama rule was “onerous” and the Trump action has made some progress in changing course, said Melanie Israel, a research associate for The Heritage Foundation, in a statement.

Americans will remain free to make their own decisions about, and purchase or find coverage for, the drugs and devices at issue in the mandate, and entities with objections will not be forced to be complicit in choices that would violate their religious or moral convictions.

Now that the administration has provided regulatory relief from the mandate, pending cases in courts across the country—including the case brought forward by the Little Sisters of the Poor—should come to a resolution as well.

The Becket Fund, which represented Little Sisters of the Poor in its lawsuit against the Obamacare mandate, supported the change.

“HHS has issued a balanced rule that respects all sides—it keeps the contraceptive mandate in place for most employers and now provides a religious exemption,” Mark Rienzi, senior counsel at the Becket Fund and lead attorney for the Little Sisters of the Poor, said in a statement. “The Little Sisters still need to get final relief in court, which should be easy now that the government admits it broke the law.”

This story was updated to include a comment from White House press secretary Sarah Huckabee Sanders.