Trump: ‘No One Should Be Censoring Sermons or Targeting Pastors’ 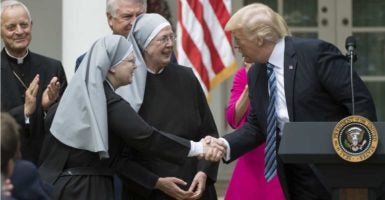 President Donald Trump greets two nuns from the Little Sisters of the Poor during the Rose Garden commemoration of the National Day of Prayer. (Photo: Kevin Dietsch/UPI/Newscom)

President Donald Trump asked two nuns with the Little Sisters of the Poor to join him in front of a Rose Garden audience Thursday before he signed an executive order easing enforcement of  Obamacare regulations forcing religious organizations to pay for employee health plans covering contraception and abortion-inducing drugs.

Trump’s order also takes aim at a 1954 law prohibiting pastors and other religious leaders from supporting specific candidates from the pulpit.

However, the order is scaled back considerably from a draft, leaked in February, that also addressed religious organizations’ freedom in hiring staff, prompting mixed reviews from conservatives.

“We know all too well the attacks against the Little Sisters of the Poor, incredible nuns who care for the sick, the elderly, and the forgotten,” Trump said, before asking representatives of the Catholic order to identify themselves and inviting them to the podium.

The nuns’ lawsuit against the Obama administration over the so-called contraceptive mandate went to the the Supreme Court, which didn’t make a final determination.

“Congratulations, you sort of just won a lawsuit,” Trump said jokingly to the two nuns. “That’s a good way of doing that. I want you to know that your long ordeal will soon be over.”

The president’s executive order states that the administration’s policy is to protect religious liberty. It directs the Internal Revenue Service to use maximum discretion to alleviate the law governing churches and partisan politics, known as the Johnson Amendment. And it offers regulatory relief for religious objectors to Obamacare rules.

“With this executive order, we are ending the attacks on your religious liberty and we are proudly reaffirming America’s leadership role as a nation that protects religious freedom for everyone,” Trump said.

Trump held the event, attended by Christian, Jewish, and Muslim clergy from across the country, on the National Day of Prayer.

Trump focused his remarks on rolling back 1954’s Johnson Amendment, named for Sen. Lyndon Johnson, the Texas Democrat who would become president nine years later. The law threatens churches, religious institutions, and other nonprofits with revocation by the IRS of their tax-exempt status if they talk partisan politics.

James Dobson, an iconic Christian broadcaster who founded the traditional values group Focus on the Family, was among faith leaders attending the Rose Garden event.

“How could I not be satisfied? I mean, we have been struggling with that Johnson Amendment since I’ve been in radio, which is 40 years,” Dobson told The Daily Siganal.

“When that mandate came down, I wrote the president [Obama] saying I cannot comply. ‘You must come get me, because we’ll close our doors,'” Dobson said. “We’ve been in a lawsuit ever since, and it went to the 10th Circuit and was headed for the Supreme Court. That goes away today. Yes, I’m happy about it.”

A pledge to ‘provide regulatory relief’ is disappointingly vague, especially given the long existence of an obvious means of solving the problem: crafting an exemption that protects all those who sincerely object on religious and moral grounds so that they can continue to serve their communities and the most vulnerable among them. We encourage the administration to pursue that course of action and to do so promptly so that it can resolve the dozens of cases still pending against it.

During his Rose Garden remarks, Trump invoked the civil rights icon and pastor Martin Luther King Jr. and the history of the African-American church, as well as the larger Judeo-Christian tradition, as reason to honor the role of religion in America’s politics.

“This financial threat against the faith community is over,” Trump said. “No one should be censoring sermons or targeting pastors. … America has a rich tradition of social change beginning in our pews and pulpits.”

Trump also heralded the Founding Fathers’ vision as evidence of the intended role of religion in public life:

Freedom is not a gift from government. Freedom is a gift from God. It was Thomas Jefferson who said the God who gave us life gave us liberty. Our Founding Fathers believed religious liberty was so important that they enshrined it in the very First Amendment in our great and beloved Constitution.

Yet for too long, the federal government has used the power of the state as a weapon against people of faith, bullying and even punishing Americans for following their religious beliefs.

The draft of the executive order that leaked earlier this year, however, also protected the right of religious organizations to align staffing decisions with their missions. And it would have prevented the federal government from discriminating against its employees or contractors for practicing their religious beliefs.

Trump “caved” on these and other provisions in the draft order, said Ryan T. Anderson, a senior research fellow with The Heritage Foundation whose studies include religious liberty. In a commentary for The Daily Signal, Anderson wrote of the president:

Today’s executive order is woefully inadequate. Trump campaigned promising Americans that he would protect their religious liberty rights and correct the violations that took place during the previous administration.

Penny Nance, president of Concerned Women for America, was among those attending the Rose Garden event. Nance told The Daily Signal she was happy with the outcome.

“We were very pleased with what we’ve seen so far. It’s a great first step,” Nance said. “There are still things left to do. We were pleased to be here today. What a beautiful day. This is a great day for religious liberty.”