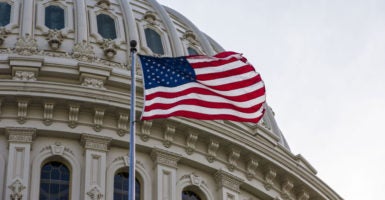 If tax reform is going to pass it is going to have to benefit all working families. (Photo: Alex Edelman/Zuma Press/Newscom)

Let’s face it: Republicans in Washington must pass tax reform.

The American people elected us expecting us to repeal Obamacare and bring about tax reform.

We haven’t repealed ObamaCare so if we don’t get tax reform done, we are in trouble.

We might as well flip up our tent and go home.

Fortunately, tax reform looks to be off to a good start. The nine-page plan released by the White House last week lowers rates, simplifies the tax code, and encourages businesses to invest in America again.

There is one problem though. The plan is not specific enough about how it will cut taxes for working families. And if those details aren’t filled in correctly then some working families would see no tax cut at all and others might even suffer a tax hike.

The hitch is that since the current tax plan eliminates the personal exemption, some families with children would actually pay less under the current system then they would under the White House plan.

This is simply unacceptable and it could spell doom for tax reform.

But don’t worry. There is a solution.

The White House tax plan does call for an increase of the child tax credit, it just doesn’t specify how much. If the tax reform legislation written by Congress fills in that detail correctly, if they at minimum double the child tax credit and make it applicable to payroll taxes, then Republicans can follow through on their promise to cut taxes for all working families.

“We’re going to cut taxes for the middle class, make the tax code simpler and more fair for everyday Americans, and we are going to bring back the jobs and wealth that have left our country,” President Donald Trump said in Indianapolis, Indiana, last week.

“We want tax reform that is pro-growth, pro-jobs, pro-worker, pro-family, and yes, pro-American. It’s time to take care of our people to rebuild our nation, and to fight for our great American workers.”

And the best way to do that is a big increase in the child tax credit.

We can do this. Let’s get this done.