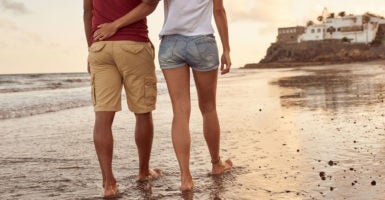 America has become intoxicated by a system of “cheap sex.”

That’s the claim of Mark Regnerus, associate professor of sociology at the University of Texas at Austin and the author of a new book, “Cheap Sex: The Transformation of Men, Marriage, and Monogamy.”

Regnerus defines “cheap sex” as “the ease of sexual access.” In an interview with The Daily Signal, he said that today, American society relies on, and has more access to, quick and noncommittal sexual pleasures.

“[Cheap sex] could be in a relationship,” Regnerus said. “It could also be with pronography, because pornography more closely mimics real sex than it ever used to. So all of these things drive down the ‘price’ of sex.”

In his book, published by Oxford University Press, Regnerus and his team studied 100 men and women ages 24 to 32 in five cities. They then conducted a survey of 15,738 people in the U.S. between the ages of 16 and 18. They looked for patterns in people’s social behavior in their sex lives.

He concludes that America is going through another “sexual revolution.”

He says people’s dependence on “cheap sex” has a lot to do with the influences of the “sex market.” Specifically, the products and media that promote sex don’t cater to women’s best interests.

“The mating market no longer seems to favor women’s interests like it once did,” said Regnerus. “It favors men’s interests, which is why so many women find dating in their 20s and early 30s so frustrating.”

Regnerus thinks that because women generally want a long-term commitment in a relationship, their interests make selling sex more difficult. Instead, the sex market plays into the interests of men, who generally prefer less commitment.

“If you asked men and you asked women, ‘What is your ideal relationship?’” he said, “more men than women will say, ‘Oh, I would love something short-term, where I can just go over, and replace whenever I feel like it.’”

And because the market has exposed society to “cheap sex” for so long, Regnerus thinks people have a hard time getting out of that mindset.

“People have been so trained into cheap sex, that they don’t know how to get out of this pattern that’s been bothering them,” he said.

Regnerus cites the example of a woman in her mid-20s who lived in Denver. He said she would sleep with people who she didn’t particularly care about. She then talked to Regnerus about a man she hopes to meet in Florida and said she’d like to raise a family with him.

Regnerus said the woman is the “gatekeeper” in a relationship, because the man has a higher sex drive, and that it’s the man’s job to sacrifice and take responsibility to allow commitment to occur.

“Men on average try to get what they can,” he said. “But when we pressure men, when women pressure men, men can rise to the occasion.”

While Regnerus’ book doesn’t offer a solution to the “cheap sex” problem, he said that people need to ask themselves, “What do I want in a relationship, and how do I make sure I get it?”