Puerto Rico Needs Help. Here’s What You Should Know. 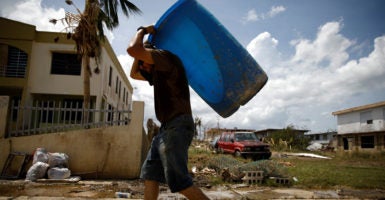 A man in Puerto Rico carries a container filled with water after the area was hit by Hurricane Maria. (Photo: Carlos Garcia Rawlins/Reuters/Newscom)

Ceara Casterline is a member of the Young Leaders Program at The Heritage Foundation.

Only days after narrowly dodging the eye of Hurricane Irma, Puerto Rico sustained a direct hit from Hurricane Maria.

It was the most powerful storm to hit Puerto Rico since 1928, and the 10th most powerful hurricane on record. Maria made landfall on Sept. 20 as a Category 4 hurricane producing winds of up to 155 mph. It brought with it heavy rains and flooding, with some areas receiving over 38 inches of rain.

The storm took a heavy toll on the island’s energy grid, which is now all but destroyed. Most of Puerto Rico’s 3.4 million residents are now left without power, and, according to Gov. Ricardo Rossello, it could be months until power is restored.

Residents are eager to get in contact with their families and loved ones, but basic communication remains difficult. Over half of the island’s transmission towers were destroyed in the storm, and almost all wireless cell sites are out of service.

Puerto Rico needs aid, and it needs it quickly. Unfortunately, progress in repairing the energy grid will be slow because Puerto Rico is an island, and the sole power provider—PREPA (Puerto Rico Electric Power Authority)—only has so many repair resources. There are no neighboring utility companies that can easily send crews.

Moreover, the Jones Act makes it unnecessarily difficult to get aid to the island, as it requires all shipping between U.S. ports be done by American-built and American-crewed vessels, even if it would be cheaper or easier to use other ships.

Nevertheless, some initial progress is being made. The New York Power Authority sent a crew of a dozen workers with drones, and thousands of federal staff are being flown in to help provide meals, water, and other needed supplies. Federal agencies have made it their first focus to set up hospitals because of the limited ability to get flights to the island.

Those affected by Maria will need medical help, food, water, and shelter. Americans can help by donating to reliable organizations such as Americares, All Hands, and Unidos Por Puerto Rico, which was created by Puerto Rico’s first lady to help provide funds, medical assistance, and volunteers to these areas.

The total costs of rebuilding after Maria will likely top $30 billion. A great deal of that money will come from the government.

Unfortunately, the Federal Emergency Management Agency’s disaster relief fund is drained from Hurricane Harvey and will need to be replenished in order to get relief to the victims of both Irma and Maria.

It is important that non-emergency spending, pork, or other unrelated policies be kept out of emergency relief bills so as to direct money to those who need it and to maintain financial discipline.

The damage from these disasters also shows that the U.S. needs to do a better job preparing and setting aside money for disasters in the future.

As those impacted by Maria slowly begin to rebuild, it is critical that our government take the proper steps to secure relief, both for the people of Puerto Rico and for future victims of natural disasters.