Will American Workers Get to Help Rebuild Puerto Rico? 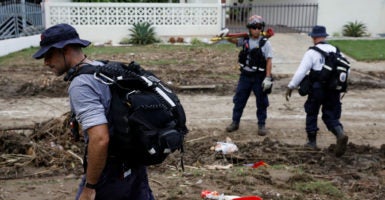 Members of the FEMA Urban Search and Rescue team conduct a search in an area of Puerto Rico hit by Hurricane Maria. (Photo: Carlos Garcia Rawlins/Reuters/Newscom)

As Puerto Ricans begin to clean up the rubble in the wake of Hurricane Maria, they are already looking to their fellow Americans on the mainland for help.

Unfortunately, American workers and businesses will not be able to play a major role in the reconstruction unless President Donald Trump overrules the Department of Homeland Security and issues an extensive waiver from the commerce-killing Jones Act.

The Jones Act of 1920 requires that all shipping between U.S. ports be done by American-built and American-crewed vessels. This means that Puerto Rico faces larger effective trade barriers with the mainland U.S. than most foreign countries.

Federal disaster aid funding is already flowing to the island, but the Jones Act’s restrictions mean that much of the money will be diverted to foreign suppliers even when mainland American suppliers would be more efficient.

Even though Trump granted a brief waiver from the Jones Act following Hurricanes Harvey and Irma, the Department of Homeland Security announced last week that it would not grant a Jones Act waiver to Puerto Rico. It justified its decision on the basis that the Jones Act fleet is sufficient to the task.

But the Jones Act fleet already imposes much higher shipping costs on Puerto Rico than on nearby islands, and it operates near capacity in normal times. To involve mainland American workers and businesses in Puerto Rico’s recovery requires a rapid increase in capacity and speed—something far beyond the ability of America’s moribund crony capitalist shippers.

Until Trump overrides Homeland Security’s decision, demand for fuel, concrete, steel, copper wire, vehicles, and building machinery will soar in Puerto Rico, but American suppliers will likely be left out in the cold. Puerto Ricans will be forced to overpay for rebuilding supplies (not to mention food, clothing, and medicine) or to buy them from other countries.

This is grossly unfair, particularly as the nearby U.S. Virgin Islands have been exempt from the Jones Act since 1920.

Puerto Rico’s badly damaged energy sector relies on oil imports from Venezuela, a socialist dictatorship that uses its revenue to prop up anti-Americanism in Latin America. If issued a waiver, Puerto Rico could switch to cheaper, cleaner natural gas from sources such as Pennsylvania and Texas.

Given the scale of the damage to Puerto Rico and the multiyear rebuilding effort to come, Trump should issue a blanket waiver from the Jones Act for Puerto Rico for as long as the territory continues to use federal aid dollars in its rebuilding.

And in order to enable a migration from foreign oil to American natural gas, Congress should grant a permanent exemption from the Jones Act for all fuel tankers.

Note: This article has been modified to correct the time period during which the U.S. Virgin Islands have been exempt from the Jones Act.