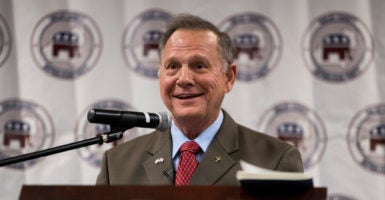 “Republican voters know who a person of principle is,” Jenny Beth Martin, co-founder of Tea Party Patriots, told The Daily Signal in a pre-election interview predicting a victory for Moore, former chief justice of the Alabama Supreme Court.

Moore will face Democrat Doug Jones in the Dec. 12 special election for the Senate seat vacated by Republican Jeff Sessions when he became attorney general in the Trump administration.

President Donald Trump had endorsed Strange, whom he considered loyal to his priorities.

“From the beginning of this campaign, my priority has been serving the people of Alabama,” Strange, the state’s former attorney general, said in a written concession statement. “Tomorrow, I will go back to work with President Trump and do all I can to advance his agenda over the next few weeks.”

In victory remarks in which he characteristically evoked faith in God, Moore said:

Together we can make America great. We can support the president. Don’t let anybody in the press think that because [Trump] supported my opponent I do not support him and support his agenda. As long as it’s constitutional, as long as it advances our society, our culture, our country, I will be supportive. … But we have to return the knowledge of God and the Constitution of the United States to the United States Congress.

The runoff Tuesday was set up when neither Strange nor Moore garnered 50 percent of the vote in a 10-candidate primary Aug. 15.  (Moore got 40 percent to Strange’s 33 percent, while Rep. Mo Brooks, R-Ala., finished third with 20 percent.)

Republicans seek to preserve their slim 52-seat majority in the 100-seat Senate.

CONSERVATIVE VICTORY HAS COME TO #ALSEN!

Because of you, tonight, the establishment has been DEFEATED in Alabama!

On  Feb. 9, then-Gov. Robert Bentley appointed Strange to the seat vacated when the Senate confirmed one of its own, Sessions, as attorney general.

Trump endorsed and stumped for Strange, but also said at a rally Friday night in Huntsville, Alabama, that he would work “like hell” to elect Moore should the challenger prevail.

But the president added: “Luther [Strange] will definitely win.”

It was great being with Luther Strange last night in Alabama. What great people, what a crowd! Vote Luther on Tuesday.

In the runoff, Moore, 70, presented himself as the true conservative, while Strange, 64, batted away accusations that he is too establishment. Moore had led in polls, but Strange appeared to be closing the gap.

Andrew Roth, vice president of government affairs at the Club for Growth, predicted in an interview with The Daily Signal that the runoff would be a bellwether for how state voters view progress in Congress.

“The way I view this race is that it’s more of an establishment versus anti-establishment race,” Roth said. “The issues, conservative or not, didn’t really play in this. The race is more about what voters want out of Congress and out of the Senate.”

“Our president needs Luther Strange back in the United States Senate so he can finish the job,” Pence said Monday night at a rally at Birmingham-Shuttlesworth International Airport. “I know Sen. Luther Strange will be there for our president, because he’s already been there.” The Washington Examiner and other news outlets reported that the Senate Leadership Fund, a political action committee tied to Senate Majority Leader Mitch McConnell, R-Ky., filled Alabama’s TV and radio airwaves with millions of dollars worth of ads backing Strange and attacking Moore.

“A vote for Judge Moore isn’t a vote against the president,” Palin said Thursday night, adding:

“While we were honored to have fought hard for Big Luther, Judge Roy Moore won this nomination fair and square and he has our support, as it is vital that we keep this seat in Republican hands,” the Senate Leadership Fund said in a formal acknowledgement of Strange’s loss Tuesday night.

“A Judge Moore win really would make sure that the Trump agenda gets implemented,” Meadows told Breitbart News, adding:

Trump won Alabama in November with 62 percent of the vote.

Moore is perhaps best known for being removed twice as Alabama’s chief justice, first in 2003 for refusing to take down a Ten Commandments monument and again in 2016, after his re-election, for ordering judges not to issue licenses for same-sex marriages.

Great to talk with President Trump tonight about #ALSen!

I very much look forward to working with the President to win in December! pic.twitter.com/A72Fdc6Mua

Martin, the Tea Party Patriots co-founder, told The Daily Signal before the polls opened that by choosing Moore, GOP voters would be “sending a message to Washington that they want someone they can count on to stick to their principles.”

A victory for Strange, she said, would be on account of Trump.

“Given President Trump’s endorsement, people in Alabama will think that Strange will support the president’s agenda,” Martin said.

The GOP runoff was a product of voter frustration with the status quo, the Club for Growth’s Roth said.

“The dysfunction in Washington has been around for so long that maybe, finally the voters have finally had enough,” Roth said, adding:

You certainly saw them express that in November when Trump won [and] you’re going to continue to see the voters express their anger until they get things fixed.

Ken McIntyre contributed to this report, which was updated to include candidate statements and final unofficial results.