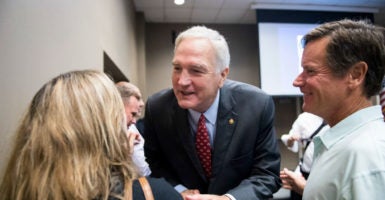 Two Republicans, Sen. Luther Strange, R-Ala., and former Alabama Chief Justice Roy Moore, will compete in a runoff election in September after failing to garner 50 percent of the vote in Alabama’s special election to fill the seat of now-Attorney General Jeff Sessions.

The winner of the GOP runoff, which will be Sept. 26, will then face Democrat Doug Jones, who won the Democratic primary Tuesday, in the general election Dec. 12.

Strange was appointed Feb. 9 to the Alabama seat vacated when the Senate confirmed one of its own, Sessions, as attorney general.

Luther Strange of the Great State of Alabama has my endorsement. He is strong on Border & Wall, the military, tax cuts & law enforcement.

Senator Luther Strange, who is doing a great job for the people of Alabama, will be on @foxandfriends at 7:15. Tough on crime, borders etc.

Big day in Alabama. Vote for Luther Strange, he will be great!

“I love the people of Alabama and I hope you go out and vote for Luther Strange for Senate,” Trump said in a robocall for Strange, adding:

It is so important that you do … I need Luther to help us out. … He is helping me in the Senate, he is going to get the tax cuts for us, he’s doing a lot of things for the people of Alabama.

A political strategist told The Daily Signal that the most surprising part of the Alabama race so far was Trump coming out in support of Strange.

“I think the most fascinating thing out of all of this is just Trump’s endorsement of Strange,” the strategist said, adding:

Alabama is one of the Trumpiest states in the union and when Trump started bashing Jeff Sessions, I think that really soured a lot of people from the state and then after that talk radio, Mark Levin, a lot of people really conditioned Republican voters that Mo Brooks was Trump’s guy and that Luther Strange was the bad guy.

When you add to that the $3 million that [Senate Majority Leader MItch] McConnell has spent from his super PAC bashing Mo Brooks, it just makes for weird dynamics in this race.

In November, Trump won Alabama with 62 percent of the vote.

Jenny Beth Martin, co-founder of Tea Party Patriots, also told The Daily Signal in a phone interview that the Strange endorsement was not expected.

“I think that most people were just surprised by the endorsement, especially when the president has been also fighting Leader McConnell at the same time,” Martin said.

Moore, who came in with 39.6 percent of the vote with 78 percent of the precincts reporting, was suspended from his post in 2003 for “refusing federal court orders to take down a Ten Commandments monument from the Alabama Judicial Building,” ABC News reported.

He was reelected as Alabama chief justice in 2013 but removed from the post in 2016 after “ordering other judges not to issue same-sex marriage licenses,” ABC reported.

Moore ran on a platform that included support for limited government, immigration reform, a border wall, energy independence, and the military.

AL.com reported that Moore received over 50 endorsements from religious leaders throughout Alabama.

“We have the opportunity this Tuesday, August 15, to send a man to Washington who shares our convictions, will fight for morality, and will restore integrity in the halls of Congress,” the leaders wrote in a letter. “That man is Judge Roy Moore.”

Brooks, who came in with 20.3 percent of the vote with 78 percent of the precincts reporting, has represented Alabama’s 5th District since 2011. He announced May 15 that he would be running for Sessions’ seat.

The Alabama congressman ran on a platform that included calls to “drain the swamp” and repeal Obamacare, and support for Second Amendment rights.

Tea Party Patriots Citizens Fund endorsed Brooks, saying that he was the best choice to represent Alabama in the Senate.

“Mo Brooks has been a fearless leader and a fighter,” Martin, chairman of the Tea Party Patriots Citizens Fund, said in a statement, adding:

He has fought to secure our borders and strengthen enforcement against illegal immigration; he has been a strong defender of the Second Amendment; he has championed our efforts to fully repeal Obamacare and return us to health care freedom; and he has fought for trade and tax policies necessary to defend and grow good American jobs.

Martin told The Daily Signal in a phone interview that voters are most concerned with sending a principled leader to Washington to represent their state.

“I think that the big thing is that people in Alabama see it as an opportunity to choose their next senator,” Martin said, adding:

We’ve just made sure that people in Alabama know who Mo Brooks is, because we have gotten to know him in the fights that he has taken on in the House, and we want to make sure that other voters in Alabama understand who he is before they make their decision for who they will vote.

The Democrat frontrunners, according to Politico, were Robert Kennedy Jr., a Navy veteran and businessman, and Jones, a former U.S. attorney.

Jones, who served as attorney general from 1997–2001 for the Northern District of Alabama, received the endorsement of former Vice President Joe Biden.

In a robocall released Thursday for Jones, Biden said Jones would “fight for you and your families in the Senate—for a higher minimum wage, for fair, affordable health care, for good schools for all our kids,” AL.com reported.