No, Alabama Closing Part-Time DMVs Is Not ‘New Jim Crow’ 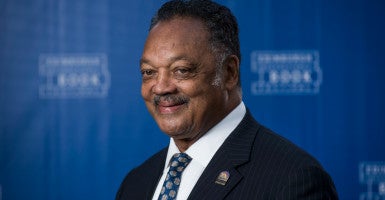 Many on the left are in a ferment over Alabama’s closure of some part-time Department of Motor Vehicles offices. It’s being done for budgetary reasons, but liberals are claiming it’s being done to raise a “barrier for poor and minority voters” in getting an ID to vote, according to the Washington Post. Former Secretary of State Hillary Clinton said that “it’s a blast from the Jim Crow past,” and Jesse Jackson claimed that “this new Jim Crow isn’t subtle.”

It’s really a sign of how desperate critics of voter ID laws are that they would raise such inflammatory, ridiculous claims over a budget issue that has nothing to do with race, Jim Crow, or discrimination. After all, they’ve been steadily losing their fight against voter ID in the courts, with only a few exceptions, and in the realm of public opinion.

Alabama’s new voter ID law for both in-person and absentee voting went into effect last year. Despite the outcries that it would “suppress” votes, there have been no problems or complaints that anyone has been unable to vote because of the new requirement. It’s been the same in all of the other states, such as Georgia and Indiana, that have implemented such ID laws. I’ve written numerous papers looking at turnout data in states after ID laws became effective—ID laws have no discernible effect on decreasing or preventing turnout.

Alabama has 44 driver’s license offices throughout the state. It apparently also had 31 satellite offices that were open only part-time and that accounted for less than 5 percent of the driver’s licenses issued each year. Because of the budget passed by the state legislature, Alabama’s state government had to “allocate scarce limited resources in Fiscal Year 2016,” according to a letter sent by Governor Robert Bentley to Representative Terri Sewell, D-Ala. So the state government decided to close these satellite offices. Sewell is one of the critics whose “impulsive, ill-informed” comments about that decision were, Governor Bentley says, “based on irresponsible media reports.”

What all of the media and critics missed or deliberately ignored is that, in addition to being able to use a driver’s license to meet the voter ID requirement, you can get a free voter ID in every single county in the state. In addition to DMV offices, the secretary of state offers free voter IDs in all 67 counties through the local election registrar.

Furthermore, as Governor Bentley points out, those satellite offices being closed are typically “located in the county buildings where the registrars and probate judges’ offices are located.” So individuals who would have used one of the part-time satellite DMV offices to get an ID will be able to simply walk to another office—in the same building—to get the ID they need for voting. And that is supposed to be the reimposition of Jim Crow?

Alabama even provides a free birth certificate or marriage license if you need it to get an ID. And if you can’t access a polling place because you are disabled or elderly, you don’t have to have an ID to vote by absentee ballot. Additionally, Alabama will continue to provide “mobile units to register and develop photo identification cards to those who need it throughout the state, and who may find themselves limited by lack of transportation,” according to Governor Bentley.

Jesse Jackson is headed to Alabama to protest what he calls an effort “to suppress the vote, skewed to discriminate against minorities.” And he is demanding a Justice Department investigation, although the only thing the Civil Rights Division lawyers would have to investigate is how many additional steps a voter will have to take to walk to the registrar’s office in the county government building to get an ID.

How many extra steps would it take to violate the Voting Rights Act in the view of the Obama Justice Department? Let’s hope we don’t have to find out.