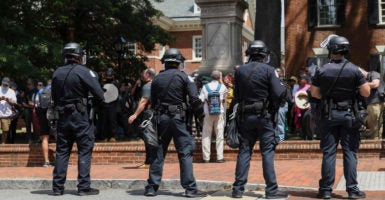 A large "Unite the Right" rally in Charlottesville, Virginia, disperses after a morning of violent clashes, Aug. 12, 2017. In response to the Charlottesville events, large labor unions are supporting liberal causes and nonprofits. (Photo: John Rudoff/Polaris/Newscom)

Some of the nation’s largest labor unions have pledged to fight hate and violence in response to the events of Charlottesville, Virginia, last weekend.

I cannot sit on a council for a President that tolerates bigotry and domestic terrorism; I resign, effective immediately. pic.twitter.com/ip6F2nsoog

“Now is a moment for all Americans who believe in freedom, tolerance, and inclusion to stand up and speak out,” AFSCME president Lee Saunders and secretary-treasurer Elissa McBride said in a statement shortly after the events in Charlottesville that left three dead and scores injured. The group also announced its support for the Southern Poverty Law Center and the Anti-Defamation League.

AFSCME, which represents 1.6 million current and retired public service employees, was not the only group to come out against Charlottesville.

“The [United Auto Workers] condemns the hate and intolerance of the alt-right groups that led to such violence in Charlottesville,” United Auto Workers President Dennis Williams said in statement Aug. 15. “Every woman and every man is equal in their civil and workplace rights regardless of race, gender, religion, or sexual orientation in society and in the workplace.”

“Our position remains unchanged: The Chicago Teachers Union condemns any hate action and speech based on race, religion, citizenry, gender, and gender identification,” the union said in a letter. “We embrace dialogue and debate in our union, but we will never waver when it comes to fighting racism. To sit idly by and do nothing would make us just as guilty as those we condemn.”