A 10th State Defunded Planned Parenthood. Why There’s So Much Momentum Now. 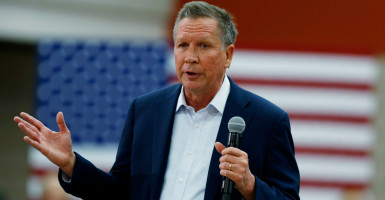 Ten states—Wisconsin and Ohio being the most recent—have taken action over the past several months to cut taxpayer dollars from Planned Parenthood.

“Not one more penny should go to Planned Parenthood, a scandal-plagued abortion business that does not provide comprehensive health care services for women,” Casey Mattox, Alliance Defending Freedom senior counsel, said in a statement.

The Ohio Legislature passed the bill, H.B. 294, earlier this month and sent it to Kasich, a Republican, for his signature. Under the new law, state and certain federal funds will be directed to federally qualified health centers and departments instead of entities that perform or promote elective abortions.

Mattox, who testified before the Ohio Senate’s Government Oversight and Reform Committee to provide legal opinion on an earlier Senate version of the bill, added:

Ohio’s new law terminates funding for Planned Parenthood and other abortion businesses, freeing up money for more widely available and more comprehensive low-cost health care options for women and families in the state. Taxpayer dollars should not go to organizations with a long track record of abusive and potentially fraudulent billing practices, that have been caught in authenticated undercover videos negotiating prices for baby body parts, and that have repeatedly failed to report the sexual abuse of girls. Ohio is right to end its relationship with organizations undeserving of taxpayer money and unworthy of the taxpayers’ trust.

Planned Parenthood has fought other states’ efforts to cut off its funding, arguing that its constitutional rights were being violated.

“Planned Parenthood’s involvement in abortion is well-known,” Chuck Donovan, president of the Charlotte Lozier Institute, told The Daily Signal. “The Center for Medical Progress videos have just pointed out exactly what that means in a way that you can’t look away from it.”

“The Center for Medical Progress put this on the national agenda,” Donovan said. “So much of government ends up being pointing out something that’s been a problem for a while and finally recognizing that the bureaucracy has let things happen.”

Donovan thinks the legal battle over the videos will have “very little effect.”

The videos are not the only factor that has played into states, like Ohio, defunding Planned Parenthood.

“It’s not just allegations of harvesting and selling tiny livers, lungs, and hearts of aborted unborn children that have led legislators to question continued taxpayer funding of Planned Parenthood,” Sarah Torre, a policy analyst in the DeVos Center for Religion and Civil Society at The Heritage Foundation, told The Daily Signal.

“The nation’s largest abortion provider has also faced accusations of bad conduct in the past, including financial waste, abuse, and possible fraud with taxpayer dollars, and some have even been accused of failing to report the sexual abuse of minor girls.”

Meanwhile, cancer screening and preventative services have decreased at Planned Parenthood, even as the number of abortions affiliates perform each year has increased. Taxpayer money would be better spent at the many other health centers that provide a wide range of care for women without entanglement in abortion on demand.

President Barack Obama vetoed a bill that would have put a one-year halt on federal taxpayer funding of Planned Parenthood. The House of Representatives failed to override the veto.

“There’s a lot of momentum that’s in states as well as in the Congress,” Donovan said. “The states’ actions indicate that even if Washington is tied up for the moment, states are still interested in going forward. They’re doing it different ways, but they’re getting it done.”