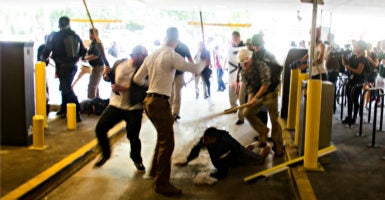 Men said to be white supremacists attack a black man Saturday in Charlottesville, bloodying him with wooden poles and a broken-off length of a parking garage barrier. (Photo: Zach D. Roberts/Zuma Press /Newscom)

The Justice Department has launched a civil rights investigation into the violence surrounding an aborted white nationalist rally in Charlottesville, Virginia.

Hours after a young man said to have white supremacist sympathies drove a car through a group of counterprotesters Saturday in the city’s downtown, killing a woman, Attorney General Jeff Sessions issued a late-night statement announcing that his department would open a federal investigation.

Police identified the woman killed by the car as Heather Heyer, 32, a paralegal in Charlottesville. Of 19 people injured in the incident, 10 are in good condition and nine were discharged,  a spokeswoman for UVA Health Systems said Sunday afternoon, ABC News reported.

“The violence and deaths in Charlottesville strike at the heart of American law and justice,” Sessions said in a prepared statement, adding:

When such actions arise from racial bigotry and hatred, they betray our core values and cannot be tolerated. I have talked with FBI Director Chris Wray, FBI agents on the scene, and law enforcement officials for the state of Virginia.

The FBI has been supporting state and local authorities throughout the day. U.S. Attorney Rick Mountcastle has commenced a federal investigation and will have the full support of the Department of Justice. Justice will prevail.

The FBI’s Richmond field office also is part of  the investigation into what officials initially called a “deadly vehicular incident.”

White nationalists who had organized the “Unite the Right” event were met by activists with the group Black Lives Matter, the self-described anti-fascist, anti-Trump Antifa, and other organizations.

The driver of the vehicle, James Alex Fields Jr., 20, a resident of Maumee, Ohio, said to admire Adolf Hitler, was held on a variety of charges, including second-degree murder. It was not clear whether authorities will deem the incident a terror attack.

Heyer was killed and 19 others injured when a Dodge Challenger plowed into a crowd of counterprotesters, officials said. Police, who said a total of 35 were injured in rally-related violence, also arrested three other men Saturday.

Fields’ former history teacher told a Cincinnati news outlet that Fields was quiet, bright, and had “radical ideas on race.”

“His senior year, he was real gung-ho about joining the Army,” Weimer said. “And he, towards the end of the year, found out that he was denied, and it was because of a history of anti-psychotic medication that he was prescribed.”

Fields recently had moved to Ohio from Northern Kentucky, where he grew up. His mother, Samantha Bloom, said she knew her son was going to attend a rally in Virginia, but didn’t know it was a white supremacist march, the Associated Press reported.

“I thought it had something to do with Trump,” Bloom told AP. “Trump’s not a white supremacist.”

Fields was photographed earlier Saturday marching with the white nationalist organization Vanguard America, but the group denied he is a member. He is second from left in the image below:

“Certainly I think we can confidently call it a form of terrorism,” McMaster said on NBC’s “Meet The Press.”

“What terrorism is, is the use of violence to incite terror and fear, and of course it was terrorism,” he said.

Appearing on another Sunday morning show, CIA Director Mike Pompeo declined to offer an assessment of the car incident and said responsibility for making that determination lies with the Justice Department.

“I think it’s best for [the] CIA director to leave this to the Justice Department,” Pompeo said on CBS’ “Face The Nation.”

The White House, meanwhile, pushed back Sunday on pundits’ criticism that Trump did not explicitly condemn white supremacists,  neo-Nazis, and similar extremist groups in his remarks Saturday on the violence in Charlottesville.

“The president said very strongly in his statement yesterday that he condemns all forms of violence, bigotry and hatred and of course that includes white supremacists, KKK, neo-Nazi, and all extremist groups,” the spokesman said. “He called for national unity and bringing all Americans together.”

We must remember this truth: No matter our color, creed, religion or political party, we are ALL AMERICANS FIRST. pic.twitter.com/FesMiQSKKn

Among the critics of Trump’s choice of words was Anthony Scaramucci, who lasted barely a week in the job of White House communications director.

Scaramucci told ABC News that Trump should have been much harsher.

“I wouldn’t have recommended that statement,” Scaramucci said of Trump’s remarks Saturday afternoon in New Jersey. “I think he would have needed to have been much harsher.”

Trump summed up the Charlottesville rally as an “egregious display of hatred, bigotry, and violence on many sides.”

“With the moral authority of the presidency, you have to call that stuff out,” Scaramucci said.

Some Republican members of Congress also made their opinions on Trump’s statement known.

“We should call evil by its name,”  Sen. Orrin Hatch, R-Utah, said on Twitter. “My brother didn’t give his life fighting Hitler for Nazi ideas to go unchallenged here at home.”

We should call evil by its name. My brother didn't give his life fighting Hitler for Nazi ideas to go unchallenged here at home. -OGH

Sen. Cory Gardner, R-Colo., urged Trump via Twitter to declare the incident an act of terror.

“Mr. President—we must call evil by its name,” Gardner said. “These were white supremacists and this was domestic terrorism.”

Mr. President – we must call evil by its name. These were white supremacists and this was domestic terrorism. https://t.co/PaPNiPPAoW

Charlottesville Mayor Michael Signer, a Democrat, appeared to blame Trump for the violence in his city.

Signer, speaking on CNN’s “State of the Union” with host Jake Tapper, said he was not seeing leadership out of the White House.

Tapper quoted Signer as placing the blame “right at the doorstep of the White House and the people around the president,” then asked the mayor why the president bears responsibility.

“Well, look at the campaign he ran,” Signer said. “I mean, look at the intentional courting, both on the one hand of all these white supremacists, white nationalists, a group like that, anti-Semitic groups, and then look on the other hand [at] the repeated failure to step up, condemn, denounce, silence, you know, put to bed all those different efforts, just like we saw yesterday.”

Trump strongly condemned what he called bigotry, hatred, and violence, but some politicians and pundits on both ends of the political spectrum criticized him for not going far enough—prompting the White House statement.

“Republicans and Democrats, if there is an issue that can unite this country, that this can be a turning point for this democracy, I think it just happened right now this weekend in Charlottesville,” Signer said.