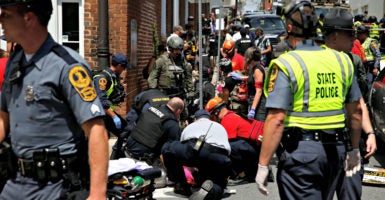 Rescue workers assist pedestrians who were injured when a car drove through a group of counterprotesters Saturday afternoon at a white nationalist rally in Charlottesville, Virginia. (Photo: /Joshua Roberts/Reuters /Newscom)

CHARLOTTESVILLE, Va.—One person is dead and nine are seriously injured after a vehicle plowed through a group of people Saturday near a demonstration by self-proclaimed white nationalists who were met by counterprotesters.

Police later announced a total of 35 rally-related injuries and the names of two Virginia State Police officers killed when their helicopter went down just outside the city.

The car incident, reportedly involving a silver or gray Dodge Challenger, occurred in the early afternoon during clashes involving white supremacists and members of Black Lives Matter, the self-described anti-fascist organization Antifa, and other groups.

“We condemn in the strongest possible terms this egregious display of hatred, bigotry, and violence on many sides—on many sides,” Trump said, adding that “we want to see what we are doing wrong as a country where things like this can happen.”

What is vital now is a swift restoration of law and order and the protection of innocent lives.#Charlottesville pic.twitter.com/DB22fgnu6L

Charlottesville Mayor Mike Signer, a Democrat, announced the death, and the Associated Press initially reported 19 injured in the car incident.

Police later said a 32-year-old woman was killed when the car struck her as she crossed an intersection.

Charlottesville police said a total of 35 people were injured in rally-related violence, including the car incident.

Numerous eyewitnesses told The Daily Caller News Foundation that someone belonging to the white supremacist movement deliberately drove the vehicle into pedestrians in the downtown area.

“I am heartbroken that a life has been lost here,” Signer said via Twitter. “I urge people of good will—go home.”

I am heartbroken that a life has been lost here. I urge all people of good will–go home.

Doug McKelway of Fox News, who was on the scene, reported that persons on both sides of the violence wore helmets and padded clothing and carried shields and large lengths of wood not needed to hoist signs.

Fox reported the driver of the car is in custody.

Virginia Gov. Terry McAuliffe, a Democrat, declared a state of emergency after violent clashes broke out earlier Saturday in the streets of Charlottesville. He later spoke by phone with Trump.

Brennan Gilmore of Charlottesville, who was chief of staff to former Democratic gubernatorial candidate Tom Perriello, shared this video by Twitter:

Video of car hitting anti-racist protestors. Let there be no confusion: this was deliberate terrorism. My prayers with victims. Stay home. pic.twitter.com/MUOZs71Pf4

Virginia State Police identified those killed in the helicopter crash as Lt. H. Jay Cullen, 48, of Midlothian, and Trooper-Pilot Berke M.M. Bates of Quinton.  No one on the ground in the wooded area was injured.

Hundreds of law enforcement officials, including Virginia State Police, remained in the streets as tensions rose in the wake of the so-called Unite the Right event.

Former Ku Klux Klan leader David Duke, who spoke at the event, claimed that his followers were advancing a Trump campaign promise  “to take our country back.”

Trump tweeted earlier, in apparent repudiation of that claim:

We ALL must be united & condemn all that hate stands for. There is no place for this kind of violence in America. Lets come together as one!

First lady Melania Trump had tweeted about the need for nonviolence and mutual respect about 45 minutes earlier:

Our country encourages freedom of speech, but let's communicate w/o hate in our hearts. No good comes from violence. #Charlottesville

The Charlottesville Police Department initially issued a statement calling the vehicle attack a three-vehicle accident near the violent clashes.

“Charlottesville Police and Virginia State Police are on the scene of a three-vehicle accident at Water and 4th streets in downtown Charlottesville,” the statement read. “Multiple injuries are reported.”

Hours before the incident, around 11:40 a.m., McAuliffe declared the state of emergency, disrupting the main part of the event slated to begin officially at noon. A state of emergency means police are able to disband any and all assemblies at will, regardless of permits obtained in advance.

The event began late Friday night as white nationalists led a march with torches toward the statue of Robert E. Lee in Lee Park and chanted slogans such as “You will not replace us.”

Participants in Unite the Right converged Saturday morning at McIntire Park, with shuttles moving white nationalists to Lee Park for the main event.

After police disbanded the main event at Lee Park, shuttles took participants back to McIntire, while others walked.

Some remained in the downtown area, clashing more with Antifa protesters.

Once main event speakers regrouped at McIntire Park, Richard Spencer, president of the National Policy Institute, recommended that all attendees move outside the city limits.

Ken McIntyre of The Daily Signal and Jonah Bennett of The Daily Caller News Foundation contributed to this report, which has been updated to reflect changing casualty numbers.