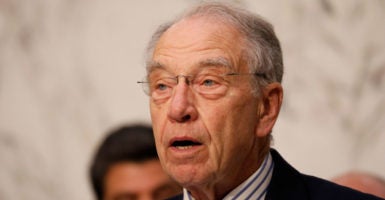 Chuck Grassley, chairman of the Senate Judiciary Committee, has requested copies of immigration files for the six Pakistani suspects in the House IT scandal, who allegedly stole equipment from Congress and accessed computers without permission.

Grassley, R-Iowa, is seeking more information on Imran Awan, his wife, his two brothers, and two of his close friends in connection to the scandal. Capitol Police have accused Awan and his associates of violating congressional security policies and stealing equipment from Congress. Awan is from Pakistan, and was arrested by the FBI in July as he tried to board a flight to the country.

“In light of the alleged illegal activity, the committee seeks to better understand Awan and his associates’ immigration histories,” Grassley said in an Aug. 4 letter to Elaine Duke, acting secretary of the Department of Homeland Security. The letter was made public by the committee Monday.

“Therefore, please provide the Alien File for the individuals listed below,” he continued. “Please also include any temporary files, working files, and all documents and items contained in them that were generated by DHS or in its possession.”

The Iowa Republican was first elected to the Senate in 1981.

>>> Wasserman Schultz Says Laptop She Sought to Keep From Police Was IT Aide’s, Not Hers

Besides Awan, the immigration files were requested for his wife, Hina Alvi; his brothers, Abid and Jamal; his sister-in-law, Natalia Sova; and his friend, Rao Rabbas. All are suspects in the criminal investigation, which became public in February.

“Awan began working as an IT aide in 2004,” Grassley said in the letter. “Later, his wife, two brothers, and two friends began working as IT aides for nearly 30 congressmen. Over the span of 13 years, they collected more than $4 million—a sum that is reported to be three times higher than the norm for a government contractor.”

All of the congressmen involved are House Democrats, including several on the intelligence, foreign affairs, and homeland security committees. The IT aides had access to all of the emails and office files of the congressmen, who employed them on a shared basis.

Awan was arrested July 24 at Dulles International Airport by the FBI, U.S. Capitol Police, and U.S. Customs and Border Protection before he could board the flight to Pakistan. His wife returned to Pakistan in March, along with their three children.

Authorities charged Awan with bank fraud in connection with a $165,000 mortgage loan from the Wright Patman Congressional Federal Credit Union. Awan wire transferred $283,000 to Pakistan prior to his attempt to flee the country, according to a court document filed by the FBI.

Within hours of his arrest, Awan retained Chris Gowen as his defense attorney. Gowen is a longtime associate of former President Bill Clinton and former Secretary of State Hillary Clinton.