Wasserman Schultz Says Laptop She Sought to Keep From Police Was IT Aide’s, Not Hers 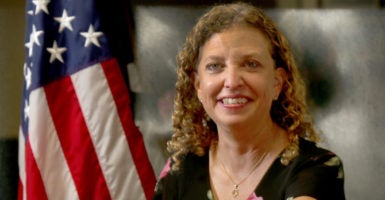 “This was not my laptop. I have never seen that laptop. I don’t know what’s on the laptop,” Rep. Debbie Wasserman Schultz, D-Fla., says of a laptop she fought to block Capitol Police from examining as evidence in a criminal case. (Photo: Mike Stocker/TNS/Newscom)

Rep. Debbie Wasserman Schultz, D-Fla., said in a newspaper interview that she never actually saw a laptop that she fought to block U.S. Capitol Police from examining as evidence in a criminal case against her IT aide by saying it was hers.

Wasserman Schultz, who resigned under a cloud last year as head of the Democratic  Party, threatened “consequences” May 18  for the Capitol Police chief unless investigators returned the laptop.

This was despite investigators’ contention the laptop was needed to help them determine whether the IT staffer violated House cybersecurity.

“This was not my laptop,” Wasserman Schultz told the South Florida Sun Sentinel in the interview Thursday. “I have never seen that laptop. I don’t know what’s on the laptop.”

She said it was the laptop of Imran Awan, her former IT aide, and was purchased using taxpayer funds from her office.

After Wasserman Schultz’s exchange in May with Capitol Police Chief Matthew Verderosa, she fought to block access to the laptop so vehemently that she hired an outside law firm to argue constitutional issues, an exceedingly rare step.

In the May hearing on the Capitol Police budget, she repeatedly posed hypothetical questions about what happens if a House member loses his or her laptop and it is found by police.

The police chief, clearly aware of the situation to which she was referring, said that if the laptop belongs to a criminal suspect, it may be seized as evidence.

The Florida Democrat opened her questioning of Verderosa by saying, “I’d like to know how Capitol Police handle equipment that belongs to a member or staffer that’s been lost in the Capitol complex and found or recovered by one of your officers. What happens?”

Verderosa replied: “If it’s part of an ongoing case, then there are additional things that need to be done.”

Wasserman Schultz then repeatedly characterized the hypothetical laptop as that of a member.

“I mean in a specific sense,” she said. “If the member loses the equipment, says they lose the equipment, and it is found by the Capitol Police, it is supposed to be returned.”

The chief responded: “If ownership has been established, it will be returned. If it’s subject to an ongoing investigation, there are additional things.”

Wasserman Schultz concluded: “I think you’re violating the rules when you conduct your business that way, and you should expect that there will be consequences.”

In the Thursday interview with the Sun Sentinel, she said Awan had misplaced his laptop in a Capitol office building.

Wasserman Schultz acknowledged that Awan is suspected by House authorities of transferring data from the House network, in addition to theft. She refused to fire him until he was arrested by the FBI July 24 as he tried to fly to Pakistan, saying she did so because she wanted police to share evidence with her and they would not.

In explaining the heated exchange with the police chief, she told the newspaper: “I was trying to get more information, I wanted to make sure [police] were following the rules.”

Wasserman Schultz told the newspaper she has allowed police to examine the laptop.  Fox News reported July 19 that  the former Democratic Party head had blocked the review for months due to issues related to the Constitution’s speech and debate clause, but was open to “negotiating” access.

A spokesman for the lawmaker, David Damron, did not immediately respond to questions from The Daily Caller News Foundation, including whether any restrictions were imposed on the laptop access Wasserman Schultz granted to police.

Damron also did not say how the speech and debate clause of the Constitution would have applied to the laptop of an IT technician who worked part-time for several House Democrats.

The clause is intended to give immunity for statements members of Congress make in carrying out their direct legislative duties, such as preparing for committee hearings.

The Sun Sentinel,  which is Wasserman Schultz’s local newspaper, called her “defiant” in the interview.  She said “you have to stand up for what’s right” in explaining why she kept Awan on staff even after police told her he was the target of a criminal investigation into cybersecurity issues.

“I would do it again,” Wasserman Schultz said, saying she had “racial and ethnic profiling concerns”  because Awan is Muslim.

Awan and one of his brothers repeatedly have been accused of fraud by other Muslims in civil court cases. In an ongoing civil case alleging life insurance fraud, their stepmother says Awan said he was “very powerful” and would have people kidnapped if she called police on him. The stepmother said he wiretapped her, and wanted her to help him access money in Pakistan.

Wasserman Schultz also told the newspaper that it was “absurd” to say Awan was fleeing the country.

Awan and his wife, Hina Alvi, also employed by Wasserman Schultz as an IT aide, bought round-trip airline tickets.But they also wired hundreds of thousands of dollars to Pakistan, listed one house for sale, and accepted a buyer for another on the day Awan left for the airport.

The FBI has said it believes Alvi has no intention of returning to the U.S. Agents arrested Awan July 24 as he tried to board a flight to Pakistan.

Damron previously declined to say what Alvi told the Wasserman Schultz’s office about her trip to Pakistan, if anything, but the office removed Awan’s wife from the payroll two days after she left.

Wasserman Schultz told the newspaper that Awan requested unpaid leave for a trip.

“When you’re trying to flee,” the Florida Democrat said, “you don’t fill out a form with your employer and go on unpaid leave.”

But tenants who rented houses from Awan told The Daily Caller News Foundation he routinely left the country for long periods of time. No gaps corresponding with unpaid absences are visible in Wasserman Schultz’s salary records in recent years.

The Sun Sentinel said Wasserman Schultz has refused to speak personally about the issue until now.

“I’ve been on vacation. I’m not hiding, and I have no reason to hide,” it quoted her as saying.