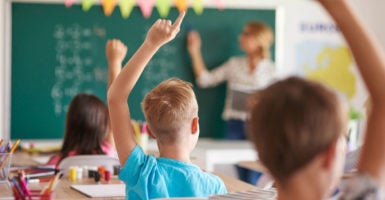 “They have to create a private school environment that’s safe and supportive for all students,” Asaf Orr, an attorney for the National Center for Lesbian Rights’ Transgender Youth Project, says. (Photo: iStock Photos)

An 8-year-old student identified as transgender is suing a private school in Orange Country, California, for failing to let the child express a preferred gender identity.

The lawsuit, filed Aug. 2, alleges that Heritage Oak Private School violated the Unruh Civil Rights Act, which outlaws discrimination based on sex or sexual orientation, because it wouldn’t allow Nikki Brar to wear the school’s girls’ uniform, use the girls’ bathroom, or be called a “she.”

Lawyers said the student is determined to fight for “education without discrimination,” the Los Angles Times reported Monday.

The suit is particularly noteworthy because it is “the first [transgender rights] case to use a state anti-discrimination law as one of the grounds for relief,” Mark Rosenbaum, director of the pro bono Public Counsel Opportunity Under Law, told the newspaper.

Nikki’s parents filed the suit against Heritage Oak; its executive director, Phyllis Cygan; and the school’s parent group, Nobel Learning Communities. They seek damages for “emotional distress and discrimination,” as well as more than $10,000 for school tuition and fees. They also ask Heritage Oak to write a nondiscrimination policy specifically for transgender students, and demand that the school teach lessons on transgender identity in the classroom.

“It honors our child’s commitment to being who she is despite adversity,” Nikki’s mother, Priya Shah, wrote in an email. “It is our small contribution toward ensuring that other transgender and gender expansive children do not go through the same hardship and trauma.”

We believed it was extremely important to respond, not hastily, but with deliberate care, to decide when and how to inform and educate our entire elementary school community of students, staff and parents about the mid-year change of gender identity expression of a young child. … Unfortunately, these accommodations were rejected and the parents withdrew their child.

“They have to create a private school environment that’s safe and supportive for all students,” said Asaf Orr, an attorney for the National Center for Lesbian Rights’ Transgender Youth Project.

An appeals court found in 2009 that a private, nonprofit school can’t be sued under the Unruh Act, but Heritage Oak is a for-profit school,  making it unlikely that the judge will rule the same way.

Nikki is expected to be a student at a public school in Orange County in the fall.