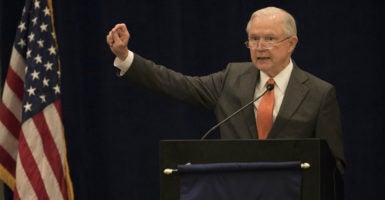 Attorney General Jeff Sessions speaks to a gathering of the nation's district attorneys July 17 at the Hilton in Minneapolis. (Photo: Jerry Holt/Zuma Press/Newscom)

Attorney General Jeff Sessions cited a reported sexual assault by an illegal immigrant in Portland, Oregon, to explain why the Justice Department will continue cracking down on sanctuary cities that receive federal funds.

“Cities and states with so-called ‘sanctuary’ policies make all of us less safe,” @JeffSessions says.

If a municipality wants access to its National Public Safety Partnership resources, the Justice Department announced Thursday, the local jurisdiction will have to demonstrate a commitment to cooperating with federal immigration agencies.

The program is aimed at providing federal training assistance to local law enforcement to combat violent crime. The program is designed to enable cities to consult with and receive coordinated training services and other resources from the Justice Department.

“By protecting criminals from immigration enforcement, cities and states with so-called ‘sanctuary’ policies make all of us less safe,” Sessions said. “We saw that just last week, when an illegal alien who had been deported 20 times and was wanted by immigration authorities allegedly sexually assaulted an elderly woman in Portland, a city that refuses to cooperate with immigration enforcement.”

Sessions was referring to reports that Sergio Jose Martinez, 31, was arrested and charged with sexually assaulting a 65-year-old woman in Portland. Martinez had been deported at least 20 times to Mexico.

The charges against Martinez reportedly include robbery, kidnapping, burglary, and sexual abuse.

Sessions said sanctuary policies are driven by politics, with disregard for the safety of a jurisdiction’s residents when officials don’t cooperate with federal immigration authorities. The attorney general added:

By forcing police to go into more dangerous situations to re-arrest the same criminals, these policies endanger law enforcement officers more than anyone. The Department of Justice is committed to supporting our law enforcement at every level, and that’s why we’re asking ‘sanctuary’ jurisdictions to stop making their jobs harder.

By taking simple, commonsense considerations into account, we are encouraging every jurisdiction in this country to cooperate with federal law enforcement. That’s what 80 percent of the American people want them to do, and that will ultimately make all of us safer—especially law enforcement on our streets.

The Justice Department plans to consider other cities. In letters to officials in Albuquerque; Baltimore; San Bernardino, California; and Stockton, California, the agency asks these questions:

(1) Does your jurisdiction have a statute, rule, regulation, policy, or practice that is designed to ensure that U.S. Department of Homeland Security (DHS) personnel have access to any correctional or detention facility in order to meet with an alien (or an individual believed to be an alien) and inquire as to his or her right to be or to remain in the United States?

(2) Does your jurisdiction have a statute, rule, regulation, policy, or practice that is designed to ensure that your correctional and detention facilities provide at least 48 hours advance notice, where possible, to DHS regarding the scheduled release date and time of an alien in the jurisdiction’s custody when DHS requests such notice in order to take custody of the alien?

(3) Does your jurisdiction have a statute, rule, regulation, policy, or practice that is designed to ensure that your correctional and detention facilities will honor a written request from DHS to hold a foreign national for up to 48 hours beyond the scheduled release date, in order to permit DHS to take custody of the foreign national?