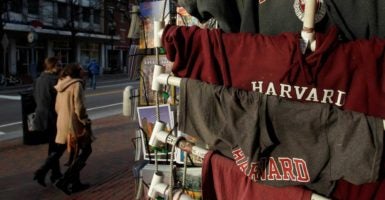 A Harvard professor is voicing displeasure over the school's direction and what he says is rampant grade inflation. (Photo: Jessica Rinaldi/Reuters /Newscom)

A Harvard University professor asserted that the school president is abetting the “slow decline” of the university from an institution seeking “truth” to one pursuing “change” in statements published Tuesday.

“[Faust] hasn’t done anything … to make [Harvard] offer a more demanding education, and she has participated in this slow decline from veritas to change,” Mansfield said in Boston Magazine. “Our motto is truth, but we now interpret that as adjusting to the changes of society. That is an essentially passive goal, which is conformist.”

“The world is changing, and Harvard must adapt to this inexorable movement,” the professor told The Daily Caller News Foundation. “What is change? Sounds neutral, but it means change for the good, change toward greater equality of individuals and peoples. It certainly isn’t maintaining tradition or conserving what is good. ‘Good’ goes with change, not with conserving. So ‘change’ means dedicated to progressivism and PC.”

Mansfield also addressed grade inflation at Harvard. The professor is known for giving students who take his classes two separate grades, one on the typical Harvard scale, with 50 percent of students receiving “A” or “A-,” and one on a scale in which only 20 percent receive those grades.

“The early 70s. When black students arrived, they benefited from great good will, which is the passion behind affirmative action,” the professor said in Boston Magazine. “A professor wasn’t going to give a black student a C, so … he couldn’t give them to white students either.”