When It Comes to Helping People, Facts Don’t Care About Your Intentions 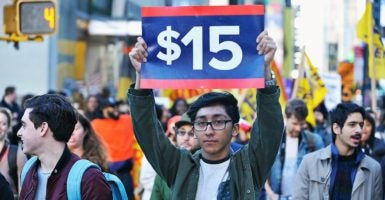 Jacob Roth is a member of the Young Leaders Program at The Heritage Foundation.

Haven’t you heard? Conservatives are heartless, cruel, and all other synonyms for “bad” because we don’t care about other people.

Which is to say that conservatives don’t agree with those on the left on how best to help the poor, educate children, and provide health care.

To many on the left, these are not just political debates. For them, our disagreement with their ideas deserves an indictment of our character and intent.

A recent Huffington Post piece by Kayla Chadwick, titled “I Don’t Know How To Explain To You That You Should Care About Other People,” demonstrates this perfectly.

The piece sums up the mindset of many people on the left toward conservatives. It also shows how the loudest on the left seem to care more about getting credit for their concern for others than they do about actually helping them.

To convince themselves and others that they are doing good and deserve to be seen as moral, they say that anyone who intends to help people would naturally support their policies, and that conservative criticism stems from a simple lack of care for others.

As Chadwick puts it, if you find fault with the minimum wage, “you’re a fundamentally different person than I am.”

If you want alternatives to public schools, “we are never going to see eye to eye.”

And, if you think there’s a solution to health care problems other than more government control, “there is a divide between our worldviews that can never be bridged.”

While this may seem like a simple acknowledgement of differences in worldview, Chadwick goes further by making the common progressive assault on the basic motives of people on the right.

Chadwick and others like her have it all wrong.

Conservatives don’t disagree with the left that the intent to help others is good. We disagree that their ideas will actually help, and thus that helping is really their first priority.

If people on the left truly want to help the poor, and have paid attention to what happened with the minimum wage in places like Seattle and Washington, D.C., how can they support the minimum wage?

The results are in from case after case: The minimum wage causes low-skilled workers to become unemployed or work at reduced hours.

In Seattle, where the minimum wage is creeping up each year to reach $15 an hour for all workers by 2021, workers have lost an average of $125 from their monthly paychecks.

It’s not unique to Seattle. In Washington, D.C., businesses have had to fire employees, fold multiple jobs into one, and raise prices because of the minimum wage.

There are legitimate discussions to be had about what policies help the poor, yet minimum wage is a proven harm.

But “Fight for 15!” looks good on poster board and sounds good in a chant, so it’s a favorite of unions that want a minimum wage to keep low-skilled workers from competing with their members.

The conservative answer to low wages is not, as Chadwick claims, to throw our hands in the air and say, “Too bad, so sad, next.”

The sustainable solution to low wages is to increase workers’ productivity. That means helping them increase their skills through better education and starter jobs.

Caring means following up on your policies to make sure they are helping, or at least not causing harm. But the Chadwicks of the left seem to care more about feeling good than doing good, often ignoring whether their policies actually work.

We have been throwing good money after bad into public education for decades, and all we have to show for it are underperforming schools and underserved students.

With health care, costs have become bloated and obscured by adding so many layers of middlemen, bureaucrats, and regulations that no one can tell you what the price of a procedure, pill, or checkup is without running it through a game of “chicken” between the doctor and the insurance company.

Looking at the results  of current government policies and pushing for more of the same is like saying if a spoonful of the medicine will kill you, downing the whole bottle should make you immortal.

The Chadwicks of the world aren’t the doctors or saviors they claim to be if they aren’t willing to follow up on the effects of their prescriptions.

A doctor schedules a follow-up appointment to make sure that what he suggested is working. If it isn’t, he should change it for the sake of his patient’s health. If he keeps writing prescriptions that cause worse side-effects than the illness itself, his license should be revoked.

We conservatives too often let ourselves lose the moral high ground at the beginning of the argument because people on the left bully us off the hill with shouts about how wonderful their intentions are and how low ours are.

That’s all they have: claims about their intentions. But their arguments based upon intentions are a cardboard cutout of actual morality. They do not deserve the high ground, and they cannot keep it if we push back and make them defend the consequences of their high and noble intentions.

Challenge them to show the substance of their policies. When they claim to care and try to climb on their high horse, pull them off the horse by making them prove it.

We care and we show it through policies that work. They like to talk, so make them walk.

They argue against our policies in practice using their ideas in theory. It’s a cheap shot and it wins them the moral debate. We don’t need to fall for it.

Research the history and consequences of their policies on their behalf. Hold them accountable to arguing about effects, not just intent.

But before you let them claim they care about those problems, make them show how they are actually going to do a darned thing about them besides shout and self-promote.