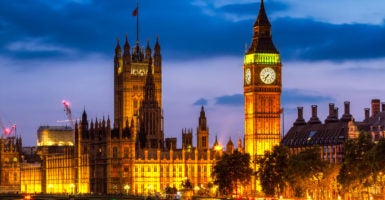 The phrase “pregnant woman” needs to be more inclusive and termed “pregnant people” in a U.N. treaty, the British government announced on Monday.

The British government’s suggestion on proposed amendments to the International Covenant on Civil and Political Rights claims the wording excludes pregnant transgender people. The treaty says “pregnant women” are protected and not subject to the death penalty, reported The Times.

The current terminology excludes transgender people who have given birth, the Foreign and Commonwealth Office claims.

“We requested that the U.N. Human Rights Committee made it clear that the same right extends to pregnant transgender people,” Foreign and Commonwealth Office officials told The Times.

There are two transgender men on record in the U.K. who have given birth after having a sex change. The biological women kept their womb and ovaries during the change, according to the Sunday report.

Some feminists are not happy about the terminology.

“This isn’t inclusion. This is making women unmentionable,” said prominent feminist writer Sarah Ditum. “Having a female body and knowing what that means for reproduction doesn’t make you ‘exclusionary.’ Forcing us to decorously scrub out any reference to our sex on pain of being called bigots is an insult.”

The British government is also considering removing a census question that asks citizens to identify gender and biological sex for the 2021 census.

The Foreign and Commonwealth Office’s comments comes after Prime Minister Theresa May announced last week that the Gender Recognition Act will likely soon be amended to let people change genders without a doctor’s approval.