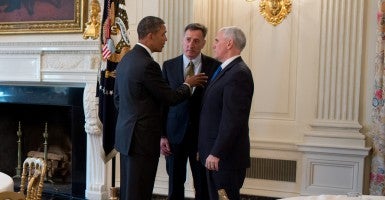 MONTPELIER, Vt. — Gov. Peter Shumlin announced this week he has called off his plans for single-payer health care in Vermont for 2015, saying “now is not the right time.”

At an unannounced news conference, Shumlin said he received the final modeling for financing single-payer health care on Tuesday and concluded the taxes required to fund a publicly financed system were simply unaffordable.

“As we completed the financing modeling in the last several days, it became clear that the risk of economic shock is too high at this time to offer a plan I can responsibly support for passage in the legislature,” Shumlin said.

“It was clear to me that the taxes required to replace health-care premiums with a publicly financed plan that would best serve Vermont are, in a word, enormous.”

The surprise announcement, which came nearly two weeks ahead of schedule, included details that Green Mountain Care’s new-revenues requirement had ballooned to $2.6 billion — up from prior high estimates of $2.2 billion. The overall cost for Green Mountain Care’s operations and coverage is estimated at $4.3 billion.

According to Shumlin’s financing plan, paying for Green Mountain Care would require a new 11.5 percent payroll tax on all Vermont businesses plus a new sliding-scale income tax of up to 9.5 percent, based on income level and family size.

Under Shumlin’s plan, a family of four with $100,000 of income or more would pay the full 9.5 percent tax. The maximum income tax for any single household would be capped at $27,500.

At the news conference, Shumlin called single-payer “the greatest disappointment of my political life so far,” and he explained why he abandoned his signature policy initiative of the past four years.

In a rundown of Green Mountain Care’s financing woes, Michael Costa, deputy director of health care reform, said $267 million in funds expected from opting out of the Affordable Care Act had shrunk to just $106 million.

Moreover, the expected availability of $637 million in Medicaid funding declined by $150 million. As for the hundreds of millions of dollars of administrative savings anticipated in the Hsiao report, they never materialized.