The President Is Right: We Must Clean Up America’s Cities 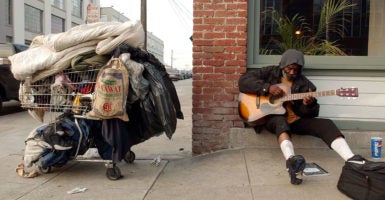 The liberal media is once again taking off at breakneck pace to condemn President Donald Trump. The fake issue for their bogus outrage? Speaking the truth about how Los Angeles and San Francisco are harmed by their deterioration into squalor caused by rampant homelessness.

As the mainstream media is much more interested in hyperbole than fact, let’s instead look at exactly what the president said. He stated that the “prestige” of premier cities in California is reduced by having homeless people littering the streets.

“We can’t let Los Angeles, San Francisco, and numerous other cities destroy themselves by allowing what’s happening,” the president said.

He also spoke of “hundreds and hundreds of tents and people living at the entrance to their office building.”

What’s objectionable is that this is 100% true, not that Trump stated the facts.

Anyone who has recently visited the largest cities in California can see precisely what the president is talking about. The decay is on full display. The homeless have literally taken over blocks of streets, creating a filthy and dangerous environment where drug use is rampant and city blocks are treated as open-air latrines. It’s truly disgusting and a bona fide health hazard.

In recent months, I traveled to San Francisco. I spent hours walking through the city. But it was not the heavily romanticized locale previously lauded as one of America’s most beautiful places.

A decade ago, you could ask someone what they pictured when they thought of the Golden Gate City: the Golden Gate Bridge, of course, as well as beautiful Victorian row houses cloaked in fog, clanging trolleys, a bohemian vibe, a city that took pride in the legendary football team of Super Bowl champions Joe Montana and Jerry Rice, the thunderous power of San Francisco Giants home run slugger Barry Bonds.

Those were certainly the associations I had as I disembarked at the airport and began a brief business trip in the city. What I discovered shocked the conscience and literally left me sick to my stomach.

I walked the streets near the corporate headquarters of Twitter and Uber. These two tech giants are examples of how San Francisco has transformed itself into a hub of technology and innovation. Scurrying along near the building and gliding past on skateboards were young and optimistic men and women dressed casually as they reported for work. A nearby gym was packed with tattooed exercisers pumping iron as electronic dance music thumped from the speakers.

But just blocks away from this oasis of upwardly mobile millennials, the scene was entirely different. It felt like something out of a Hollywood movie depicting a post-apocalyptic society in the aftermath of a total breakdown of social norms.

I literally saw no fewer than 10 people shamelessly shooting heroin into their veins. They did this openly, in the street, utilizing the free needles that the city has distributed in order to discourage drug abusers from spreading AIDS by sharing dirty needles. Dozens of discarded needles could be seen on the sidewalks.

I looked on in disbelief as a man held his shirt aside as a woman with matted hair shoved a syringe into his neck, plunging illegal narcotics into his veins. Around the corner, an encampment of homeless people milled about next to a half-dozen tents that had been set up on the sidewalk right next to the entrance of an office building.

A barefoot man with open sores oozing blood and pus wandered aimlessly in the street, his eyes glazed over and his mouth opening to emit sounds somewhere between howls and moans. Crack pipes were passed among filthy people squatting on the sidewalk.

I could only stare and shake my head as a man pulled down his pants and defecated in a tree box next to a busy road as people walked past and cars whizzed by.

Shocked by what I had witnessed in the districts known as the Tenderloin and SoMa, I asked a friend who has called San Francisco his home for decades what it was like to live there.

“Please don’t judge the entire city by what’s taking place in some neighborhoods,” he said. He also opined that the city was growing increasingly unlivable, as the local government has made the homeless problem worse by refusing to take strong action to get people off the streets and clean up the city.

“We need our own [Rudy] Giuliani to come and clean San Francisco up,” he told me. Surprising sentiments from an unabashed far-left liberal who backed Barack Obama and today supports Bernie Sanders.

Trump is 100% right. We harm the prestige of these formerly beautiful cities and damage the reputation of the whole country by permitting this situation to persist. We must wake up, admit we have a serious problem, and undertake the hard work of literally cleaning up America’s cities.

Failure to do so harms the prestige of this entire country.