One Union’s Desperate Effort to Unionize Automakers in the South 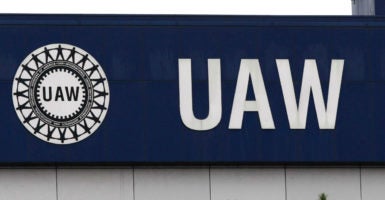 The United Auto Workers' membership has fallen by over two-thirds since 1979. (Photo: Rebecca Cook/Reuters/Newscom)

A union organizing campaign at one workplace does not normally generate national headlines, but the 10-year-plus effort by the United Auto Workers to unionize the Canton, Mississippi Nissan plant is an exception.

It is a matter of survival for the United Auto Workers. Membership has fallen from a high in 1979 of 1.5 million to around 400,000 today.

A longtime strategy for the union to boost membership rolls is to organize foreign automakers in the South, known in the industry as transplants. Up to this point, the union has failed to successfully execute this plan.

Maybe Aug. 3 and 4 will be a game-changer. On those dates, the National Labor Relations Board will supervise a secret-ballot election at the assembly plant where between 3,500 and 3,800 permanent Nissan employees will be eligible to vote on union representation.

To encourage Nissan employees to unionize, the union has promised higher wages, greater benefits, and increased job security at the plant.

But productivity—not unionization—determines workers’ compensation. Yes, the union could push Nissan into providing higher wages and benefits, but because a Nissan spokesperson attested that the company already pays above average wages for the region and occupation, higher wages will likely result in fewer jobs.

Of course, the United Auto Workers has also promised greater job security, but that’s not something it can promise unless it’s willing to pony up paychecks for workers Nissan can no longer afford to employ.

What the United Auto Workers really means by increased job security is that the union—instead of Nissan—will decide who gets laid off.

That means seniority, as opposed to productivity, will determine layoffs and workers will have little control over the fate of their jobs.

Up against all these problems, the union seems to realize open discussion is not to its benefit.

Instead of allowing Nissan to inform its workers about the potential downsides of unionization—as Nissan has the right to do under the National Labor Relations Act—the union has sought to silence Nissan by labeling its actions as “intimidation” tactics.

Still, one advantage the union may be relying on is an Obama-era regulation known as the ambush election rule, which was implemented with the intention to limit debate during the union election process by shortening the time frame between the filing of a petition and the date on which an election is conducted.

Prior to the ambush election rule, the median time frame from the petition to when the election was conducted was 38 days. Under the ambush rule, the median election takes only 24 days, giving workers 14 fewer days to make a decision that impacts almost every aspect of their work lives.

The United Auto Workers petitioned for an election at the Nissan plant on July 11, which means the time between the petition and election will be 24 days.

Even if the United Auto Workers cannot successfully unionize Nissan workers in the upcoming election, its election petition at least granted it access to the private information (telephone numbers, email addresses, and work schedules) of Nissan employees—something it will undoubtedly use to convince Nissan workers to unionize in the future.

Even the National Labor Relations Board readily admits that this information could be used to “harass, coerce, or rob employees.”

Ultimately, workers will decide whether or not to unionize. To make that decision, workers should be entitled to enough time to educate themselves on the impacts of unionization, and they should not have their private information given out without their consent.