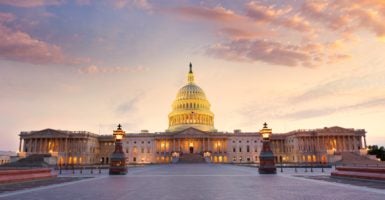 On Thursday, Republicans in both the House and Senate took a major step toward nullifying the Consumer Financial Protection Bureau’s harmful arbitration rule.

In the House, Financial Services Committee member Rep. Keith Rothfus, R-Pa., sponsored a resolution of disapproval that will allow Congress to invalidate the rule through the Congressional Review Act.

At almost the exact same time, Senate Committee on Banking, Housing and Urban Affairs Chairman Mike Crapo, R-Idaho, and his Republican colleagues announced that they would also file a joint resolution of disapproval under the Congressional Review Act.

Members of Congress had previously voiced concerns that the new arbitration rule would harm consumers—more than 50 members sent Consumer Financial Protection Bureau Director Richard Cordray a letter in June—but the bureau failed to address those concerns in its final rule.

Now, Congress has taken a definitive step toward protecting consumers from the rogue rulemaking of the Consumer Financial Protection Bureau.

Arbitration and the New Rule

In 1925, Congress passed the Federal Arbitration Act to establish a strong federal policy in favor of arbitration—an efficient, cost-effective, and fair way to resolve disputes.

Many trial lawyers oppose arbitration because it denies them of exorbitant class-action lawsuit fees—it is an inexpensive alternative to courtroom litigation.

Arbitration is undeniably a fair and effective alternative for resolving disputes, particularly between businesses and consumers.

Proponents of the bureau’s rule are upset that financial services companies often use mandatory arbitration clauses in their contracts, thus preventing customers from resolving disputes through class-action litigation.

The new rule would ban arbitration agreements that block groups of consumers from bringing class-action lawsuits.

Advocates claim that the new rule will “stop companies from sidestepping the courts and ensure that people who are harmed together can take action together.”

One major problem with this hypothesis is that the Consumer Financial Protection Bureau’s own study undercuts the idea that arbitration is unfair or harmful to consumers.

Arbitration has a long history of benefiting consumers, and the Supreme Court has recognized that Congress enacted the Federal Arbitration Act because it “had the needs of consumers, as well as others, in mind.”

An even bigger problem is that the Dodd-Frank Act authorized the bureau to regulate (or even prohibit) mandatory arbitration agreements only if its rule was consistent with its study.

Members of Congress clearly recognize that the bureau’s study does not support the drastic action of banning these arbitration agreements, and consumers should be thankful.

The Congressional Review Act is a tool that Congress can use to check the modern administrative state. It allows Congress to invalidate an agency rule via a joint resolution of disapproval signed by the president.

It gives Congress a limited period—60 days after the rule is received by Congress—to nullify a rule, and the resolution only need pass by a simple majority in both chambers of Congress.

Now it’s simply up to Congress to vote, and at least one senator believes Congress will act in the next few weeks.

The Consumer Financial Protection Bureau’s arbitration rule is only the latest example of why Congress should never have given an independent agency such far-reaching rulemaking, supervisory, and enforcement powers.

Congress should use the Congressional Review Act to protect consumers sooner rather than later.