Lawmakers Plot Push to Break Up the Most Liberal Federal Court 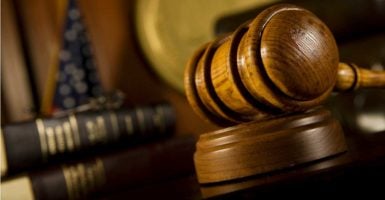 The 9th U.S. Circuit Court of Appeals is the largest of the federal circuit courts. (Photo: Ingram Publishing/Newscom)

A group of Republican senators will introduce legislation splitting the country’s largest—and some say most liberal—appeals court into smaller, separate jurisdictions.

The effort is led by GOP Sen. Jeff Flake of Arizona, who argues the burgeoning docket on the 9th U.S. Circuit Court of Appeals has dramatically slowed the pace of justice.

“With regard to the court, it’s just access to justice,” Flake said. “Its docket is more than twice as big as the next biggest circuit. This has been a long time coming, and hopefully we can make some progress finally.”

The 9th Circuit is far and away the largest of the federal circuit courts. Fully, one-fifth of the country lives in the 9th Circuit, which extends from the Grand Canyon in Arizona, to the far reaches of Alaska, to the remote Northern Mariana Islands in the Central Pacific.

As the population of the American West has swelled in the post-war period, so too has the court’s caseload. Judges on the court struggle against a torrent of cases, resulting in lengthy turnaround times.

There is also a question of access. The court hears cases year-round in San Francisco, Pasadena, and Seattle. Though the judges periodically travel to hear cases elsewhere, parties outside the densely populated coast lack ease of entry into the judicial system.

And where the 9th Circuit is concerned, it’s impossible to slip the matter of judicial ideology. The court frequently solicits criticism from Republican critics for its implacably liberal streak. Eighteen of the court’s 25 judges were appointed by Democratic presidents, making the 9th Circuit the bulwark of progressive jurisprudence in the federal courts, though many contend that reputation is less and less true.

Professor Carl Tobias of the University of Richmond School of Law, an expert in federal judicial selection, suggested that the Senate should follow the recommendation of the U.S. Judicial Conference and simply add more judgeships to the court, instead of splitting it into separate parts.

“The major problem is that there is no feasible way to split the court that will be an improvement,” Tobias told The Daily Caller News Foundation. “California cannot be divided and a single-state circuit does not exist among the 11 regional circuits. However, Congress could help the 9th Circuit by authorizing the new judgeships that the Judicial Conference has recommended based on conservative estimates of case and work loads.”

He’s also dubious of splitting the 9th Circuit apart for ideological reasons. “I think that breaking up the court out of concerns about its substantive decision-making is an inappropriate reason to reconfigure the court,” he said.

“The problem has always been that is has a very large and somewhat unwieldy geographic area and caseload, so the question is whether there’s an effective way to deal with those appeals,” Democratic Sen. Richard Blumenthal of Connecticut said. “I’d have to see those details.”