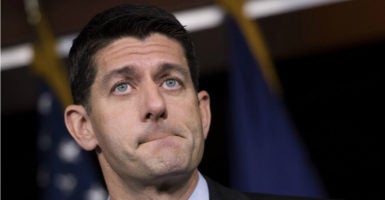 The chairman of the largest conservative caucus in Congress is pushing House Republicans to pass a stopgap spending package before the Senate can finish work on its version.

The government’s authority to spend money expires at the end of the fiscal year, Oct. 1. And Majority Leader Mitch McConnell, R-Ky., is racing ahead on the upper chamber’s version of the spending package before that deadline.

But the House is stuck in neutral.

“What our CR does is try to advance a responsible spending program for the federal government that has a few key conservative riders and has no leftist riders on it,” Flores told The Daily Signal, referring to the short-term budget measure and “policy riders” that lawmakers often attach to spending bills.

Those policy provisions would require tougher vetting for refugees who are “from areas dominated by radical Islamic terrorists.”

It also would halt the White House plan to relinquish control of ICANN, the global nonprofit that functions as the phonebook of the internet by curating website domain names. Flores described the administration’s move as “Obama’s internet giveaway.”

The package is more compromise than conservative wish list, Flores admits. Since the beginning of the year, RSC has spearheaded the effort to reduce spending and avoid legislating during a lame-duck session of Congress—the period after the election but before the next Congress convenes.

Though the plan concedes both priorities, Flores said it’s the best possibility in the current political climate.

“Look, I don’t like [continuing resolutions].” Flores said. “I don’t think it’s a responsible way to fund the government. However, when you get put in a position where the government is going to be held hostage—particularly troop pay—then we’ve got to do this in a responsible manner.”

The Texas representative blames McConnell, the Senate majority leader, for caving to Democrats and creating the current debacle.

Before House Republicans could agree on a unified position on spending, McConnell announced he would negotiate the details of a continuing resolution with Senate Democrats and the White House.

Though by law spending bills must originate in the House, the Senate has repurposed a bill from the lower chamber as a “legislative shell.” But while that procedure gave the upper chamber a head start, it  still hasn’t been able to agree on what will be in the final package.

Democrats insist they won’t vote for any bill that includes conservative policy riders that they call “poison pills.” And Flores said he is worried that Senate Republicans, eager to skip Washington for the campaign trail, are willing to oblige.

McConnell’s office did not respond to The Daily Signal’s request for comment.

The spending plan also excludes some Democrat priorities. Flores said it would prevent revival of the Export-Import Bank, stop renewable energy initiatives, and prevent Planned Parenthood from receiving any funds to fight the Zika virus.

The Zika issue has caused consternation among conservatives, who don’t want money appropriated to fight the virus to be used by Planned Parenthood. It’s not clear that the absence of an earmark alone is enough to stop money from flowing to the nation’s largest abortion provider, though.

The Flores proposal has attracted backing from the more conservative corners of Congress. Tuesday night, several members of the House Freedom Caucus expressed initial support for the Flores bill and frustration at the current situation.

“We want regular order. Speaker [Paul] Ryan talked about regular order. Well, by golly, let’s have regular order,” said Rep. Jeff Duncan, R-S.C., before launching into an explanation of how the House is supposed to pass spending bills before the Senate.

“But they don’t want to do regular order,” Duncan said. “They want to work out all the differences in the front end, then drop this big bill in front of us and say this is all you have a chance to vote on.”

Flores said he has pitched the idea to leadership. But when asked by The Daily Signal, a Ryan aide would say only: “House Republicans continue to work with our Senate colleagues on a continuing resolution.”

The plan didn’t come up during a Republican conference Wednesday morning, however, a source inside the closed-door meeting told The Daily Signal.