This Official Had the Spine to Stand Up to the Powerful CFPB. Congress Should Follow His Lead. 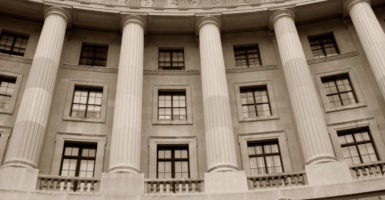 The Consumer Financial Protection Bureau's final rule would prohibit a variety of financial service providers from requiring customers to engage in arbitration of disputes rather than filing or joining a class-action lawsuit. (Photo: iStock Photos)

Three cheers for Keith Noreika, the acting comptroller of the currency, for having the chutzpah to challenge the regulatory deceit of the Consumer Financial Protection Bureau and its director, Richard Cordray.

As reported by The Wall Street Journal, Noreika on Monday took the unusual (and commendable) step of calling for delay of the bureau’s new and deeply flawed arbitration rule in order to review its (likely considerable) impact on the banking system.

Despite repeated requests to review the data underlying the rule, the bureau has refused to release it.

Cordray’s cover-up is undoubtedly driven by the methodological defects that render the data—and the bureau’s use of it—shady. It illustrates precisely why Congress must eliminate the Consumer Financial Protection Bureau, which wields unparalleled rule-making, supervisory, and enforcement powers, and operates without accountability to the legislative or executive branches.

The final rule prohibits a variety of financial service providers from requiring customers to engage in arbitration of disputes rather than filing or joining a class-action lawsuit. The rule also requires service providers to hand over confidential records of arbitration and court proceedings to the Consumer Financial Protection Bureau.

According to bureau officials, the rule is based on research findings that arbitration agreements are preventing consumers from seeking class-action relief for violations of law by financial service companies.

In reality, arbitration agreements have long been a target of trial lawyers who collect enormous fees from class-action lawsuits. Indeed, scores of studies have documented that arbitration improves individuals’ access to justice, and resolves disputes faster, cheaper, and more effectively than litigation.

No one is forced to sign an arbitration agreement. As Cordray himself has acknowledged, a great many companies do not employ them, and consumers have a variety of choices among service providers.

Unlike some other regulations imposed by the bureau, there is statutory authority for an arbitration rule.

The statute also authorized the bureau to regulate arbitration agreements “if the bureau finds that such a prohibition or imposition of conditions or limitations is in the public interest and for the protection of consumers. The findings in such rule shall be consistent with the study conducted under subsection (a).”

The bureau produced an arbitration study in 2015, but the content was methodologically meaningless and the rule is not, in fact, consistent with the study.

Researchers Jason Scott Johnston and Todd Zywicki, of the Mercatus Center at George Mason University, analyzed the bureau study and found a variety of flaws.

According to Heritage Foundation senior legal fellow Hans A. von Spakovsky, there is no empirical evidence that arbitration favors businesses over consumers, or that its rules of procedure impinge on the rights of individuals or prevent them from receiving just compensation for their injuries.

Noreika’s call for halting the rule is significant in that it is rare for a high-level regulator to call out a fellow administrator. However, Cordray’s unconstrained powers are radical, and the rule violates the statute from which it was derived.

Halting the rule should be only a first step. Congress should immediately exercise the Congressional Review Act to rescind the rule and prevent a similar one from being imposed.

Lawmakers should then move to dismantle the Consumer Financial Protection Bureau and send Cordray and his crew packing.