Conservatives Do Believe in Social Justice. Here’s What Our Vision Looks Like. 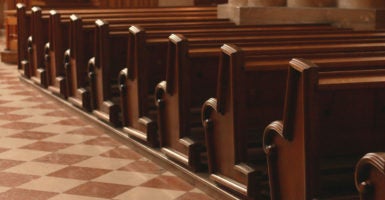 The conservative vision of social justice sees economic empowerment as a means to more important ends, namely, the fulfillment of personal duties within the family, religious bodies, and the other private spheres of life. (Photo: iStock Photos)

Novak was committed to rightly ordered liberty and cared deeply about the principles and practices that produce it. His enormous body of work emphasized the cultural prerequisites for political and economic freedom, as he stressed that economic conservativism and social conservatism are indivisible.

In the words of Heritage Foundation founder Ed Feulner, “Michael forced those of us trained in the dismal science of economics to explain that we should be more than ‘free to choose’—rather we should be free to make good free choices.”

Last year, I was the recipient of the Acton Institute’s Michael Novak Award for “outstanding scholarly research concerning the relationship between religion, economic freedom, and the free and virtuous society.” Upon receiving it, I delivered the annual Calihan Lecture in London, England, at a conference on “The Crisis of Liberty in the West.”

Economic freedom was to allow people the space to fulfill these duties. So rightly understood, social justice is about fulfilling our duties to the various societies of which we are a part, and it is about the state respecting the authority of the many societies that make up civil society.

Take, for example, the society known as the family.

The family is a natural society with its own nature and integrity. Because of the natural reality of the family, we have certain obligations.

As a result, the nature of religious authority places limits on political authority and places duties upon members of the church.

The State and Social Justice

But while respecting their authority and the markets that allow them to interact and fulfill their duties, government can perform certain welfare activities, as Friedrich Hayek taught us, without distorting market signals and processes.

Insofar as government programs are intended to ameliorate the forces of globalization and new technologies distort markets, they are likely to simply make matters worse by prolonging the dying process of outdated industries and preventing the necessary transitions.

What a natural law account of social justice would suggest are policies that would empower more people to engage for themselves in the market and flourish.

I can illustrate this with some examples.

Consider education. Some “taxation is theft” libertarians say children should receive whatever education their parents, extended families, and charities can provide and that there is no role for government to play. Liberals say the education of children is a matter of public concern, and thus government should run schools and most children must attend them.

Conservatives have traditionally said, yes, education is a matter of public concern, but justice requires us to respect the authority of parents, and whatever assistance we provide must empower, not replace, them.

Hence conservative support for school choice: vouchers, education savings accounts, and charter schools—programs that help all students get the best education they can without giving the government an unhealthy monopoly on schools.

The same is true for health care.

Consider the standard false dichotomy: If taxation is theft, then we should just leave health care to the market and charities; if health care is a matter of public concern, then government should run it and finance it—the typical libertarian and liberal pitfalls.

The conservative alternative has been to create markets in health care while empowering patients to choose, whether through premium support, health care vouchers, tax credits, or what have you.

The details of the policy need not bog us down. The concept is what matters. We need to make markets work better and work for more people by empowering more people to be market actors—empower more people to take control of their own lives and flourish.

So now the question is what can be done for working-class families, especially for workers who find their skills less and less marketable in ever-changing markets because of the forces of globalization and new technology.

We need to think about the justice in the distribution of costs and benefits of the creative destruction of free trade and globalization and how best to smooth out the rough patches. We need to think through the appropriate roles of various institutions:

In a certain sense, the economic challenges I discuss in my Calihan Lecture can be classified as partly the result of a deindustrialization making way for the knowledge economy.