The Left Is a Greater Threat to America Than Putin 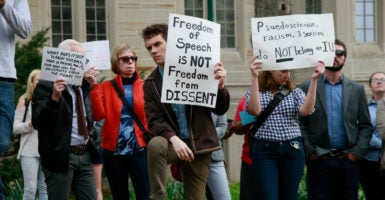 Last week, I tweeted, “The news media in the West pose a far greater danger to Western civilization than Russia does.”

To my surprise, the tweet went viral. And while there were more likes than dislikes, 99 percent of the written reactions were negative.

–“I’ve wiped s— off my shoes more trustworthy and patriotic than your sorry a–.” That received 606 likes.

You get the idea.

But it wasn’t the ad hominem insults that I found troubling. What was troubling was the low state of logical thinking that so many responses reflected.

This was exemplified by their reminding me how important a free press is to democracy (as if attacking the behavior of the media were the same as denying the need for a free press); their asking how many nukes the media have compared with Russia (as if a threat to lives were the same as a threat to a civilization); and their thinking that my tweet was about President Donald Trump (he was never mentioned, and the words were just as true when Barack Obama was president).

My tweet was about the Western left undoing Western civilization. My one regret is that I did not mention universities along with the media.

With regard to Russia having more nukes than the media, those who noted this fact so missed the entire point of the tweet that it is almost breathtaking.

When one speaks about dangers to a civilization, one is speaking ideologically, not physically. Of course, if Russia were to unleash its nuclear weapons against the West, it would kill vast numbers of Westerners.

Furthermore, a Russian nuclear attack threatening the West’s physical existence is an utterly remote possibility. Russian leaders, just as Soviet leaders before them, fear what is known as MAD (mutually assured destruction).

The real nuclear threat comes from North Korea and, above all, Iran, which constantly announces its intent to exterminate Israel. But while The New York Times cannot stop writing about the threat Russian President Vladimir Putin poses, it accuses Trump of “demonizing” Iran.

That’s why the most depressing of the negative reactions were those from people calling themselves conservatives. If conservatism isn’t about conserving Western civilization first and foremost, what is it about?

Students in college have voted the American flag off their campus. Where did these students learn their unprecedented contempt for America and patriotism, if not from their schools and the media?

Do the critics of my tweet conclude nothing about the left’s role—meaning the role of Western media and academia—in promoting multiculturalism, the doctrine that holds that no cultural, religious, or value system is superior to any other?

At the University of Pennsylvania, its left-wing English department has removed its long-standing portrait of Shakespeare because he was white and male. Is that not a direct hit on Western civilization?

The left-wing prime minister of Canada has proudly announced, “There is no core identity, no mainstream in Canada,” and that Canada is “the first postnational state.”

What produced him? Putin?

Is it Putin who is removing American flags from American campuses?

Is Putin destroying the notion of male and female?

Has Putin convinced half of America’s millennials that socialism is preferable to capitalism?

Did Putin convince Pope Francis that Islamic terrorists are no more of a threat to Europe than baptized Catholics who kill their girlfriends?

Is Putin the reason Oxford University students voted that Israel is a greater threat to peace than Hamas?

Putin is indeed a murderous quasi dictator. But all this contempt for Western civilization comes from the Western media and the Western universities.

The smoking gun was provided just two weeks ago in the media’s reactions to Trump’s speech in Warsaw, Poland, in which he called for protecting Western civilization.

Virtually the entire Western media said it was a call to protect white racism—because the media deem Western civilization to be nothing more than a euphemism for white supremacy.