Jobs Report Stronger Than Expected, but More Must Be Done to Boost the Economy 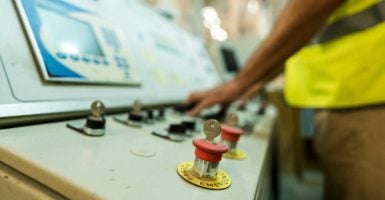 The economy still struggles under the accumulated weight of growth-killing policies left over from the Obama administration. (Photo: Jaen Stock Westend61/Newscom)

Despite the low rumble of an economic slowdown on the horizon from various experts predicting the worst is to come, the Trump administration will no doubt be happy to say the experts were wrong with the July jobs report released by the Bureau of Labor Statistics Friday.

It reports the economy added 222,000 jobs, which represents a significant increase over expert predictions of 158,000 jobs. The June unemployment rate was virtually unchanged at 4.4 percent, and the labor force participation rate crept up to 62.8 percent after four months of decline.

While on the face, these numbers are decent, the White House celebration should be short-lived, and more attention must be placed on passing meaningful reforms through Congress. Growth cannot be sustained if we continue down the same path we are on.

Similar to last month, we saw primary gains in health care (37,000 jobs)—continuing its upward trend since early 2016, social assistance (23,000), financial activities (17,000), and mining employment (8,000)—representing an increase of 56,000 jobs since reaching a low in October 2016, and representing a promise kept by Trump to put coal miners back to work.

Even though the labor force participation rate fell slightly, there are still several million Americans who could be working that are not. This means that job creators are still not confident enough to expand their employment rosters.

In addition, we continue to see long-term unemployment numbers struggle (24.3 percent of those unemployed), as well as stubborn numbers for people marginally attached to the workforce and people employed part time for economic reasons.

As mentioned above, many experts are hesitant to celebrate because of concerns about inflation, and a tightening job market. Other than heroic executive action by Trump, the economy still struggles under the accumulated weight of growth-killing policies left over from the Obama administration. If nothing is changed, the numbers (and the experts) will continue to be pessimistic and stagnant.

Over the past 10 years, Washington has raised taxes, increased the regulatory burden on manufacturers, destroyed choice and affordability of health care, invested nearly a trillion dollars of government money in a failed effort to “stimulate” the economy, and propped up the stock market with quantitative easing.

All of this for an average growth rate of 1.9 percent.

Currently, there are several proposals on the table that would jump-start this economy. They range from tax cuts, to repealing Obamacare, to reforming the tax code, to renegotiating deals that allow for free trade between our friends in other nations. All are likely to help.

It’s time to try something different, it’s time for policies that encourage the millions of people that could be working to get back in the workforce.