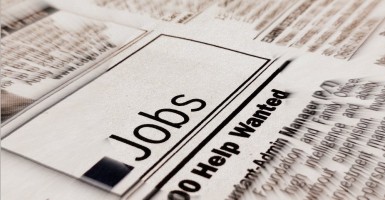 On the jobs front, it’s a story of not much better and not much worse.

The Bureau of Labor Statistics’ July employment report shows middling growth in the labor market. It shows no hint of economic backsliding, but it also shows few signs of the robust growth many economists hoped for—and expected.

The report stated employers added a net 209,000 jobs in July—matching the average growth over the past 12 months. This represents decent job growth, but it throws cold water on hopes that the almost 300,000 net jobs added in June reflected an accelerating labor market. Furthermore, wages tend to rise and workweeks lengthen when the job market heats up; neither happened in July. Average workweeks remained flat (34.5 hours) and average hourly earnings rose one cent to $24.45. June’s encouraging numbers now look like statistical noise around a trend of more modest growth

If the economy already stood at full employment, economists would welcome adding 200,000 jobs a month. But the economy needs to add approximately 120,000 jobs a month just to keep pace with population growth. Job growth in the 150,000-200,000-per-month range means unemployment will come down slowly.

Indeed the household survey showed the unemployment rate rising a statistically insignificant 0.1 percentage points to 6.2 percent as the number of unemployed rose over the month (+197,000 workers). Fortunately this increase occurred because of slightly higher labor force participation (+329,000 workers) and not because of net job losses. Both changes occurred well within the household survey’s statistical margin of error. The labor market appears to be neither accelerating nor decelerating.

Further evidence of this comes from one of the most accurate unemployment forecasting models—the Barnichon-Nekarda model based on labor force inflows and outflows. The model, which accurately predicted July’s unemployment rate, projects unemployment will hover around 6 percent for the rest of the year.

On the other hand, the economy does not appear headed for a recession. Economists feared this possibility after the economy unexpectedly contracted in the first quarter. Fortunately growth recovered in the second quarter, and today’s job growth further dispels those fears. A contracting economy does not add 200,000 jobs.

One discouraging trend: Part-time employment did not drop as hoped. The Bureau of Labor Statistics uses two measures of part-time employment. It asks workers how many hours they worked in the previous week and how many hours they usually work. In June both measures jumped by more than 800,000 workers—accounting for all the month’s net job growth. Some economists warned this surge in part-time employment reflected the weakness of the economy, but others took a wait-and-see approach since these numbers tend to jump around a lot because of the household survey’s large margin of error. But the figures for part-time employment changed little in July, dropping somewhat in one measure and rising slightly in the other. Both remain well above where they stood in the spring, which means the labor market remains weaker than the headline figures suggest.