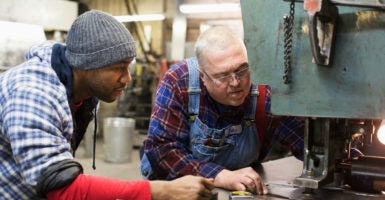 Little in the August employment report showed the economy slowing down, but nothing showed it picking up either. (Photo: Jetta Productions Blend Images/Newscom)

Little in the August employment report showed the economy slowing down, but nothing showed it picking up either.

This is a problem. While the unemployment rate has returned to pre-recession levels, this partly occurred because many Americans stopped looking for work. People not looking for jobs do not officially count as unemployed. But in a stronger economy they would have jobs. The Congressional Budget Office estimates the U.S. economy still faces a 1.4 million employment shortfall. Job growth that treads water is not enough.

Congress and policymakers should pursue policies that encourage businesses to expand and hire. One of the largest problems in this regard is the Affordable Care Act, also known as Obamacare.

Many businesses have reported curtailing hiring because the law increased their costs. More evidence of this comes from the Federal Reserve Bank of New York, which regularly surveys New York state businesses.

When a single law causes one in six firms to reduce employment, it should not remain on the books.

When a single law causes one in six firms to reduce employment, it should not remain on the books. If Congress wants to encourage job creation it should repeal Obamacare.

America is much more litigious than most other developed countries. Defending against frivolous lawsuits costs businesses a lot of money. They could invest those resources in their operations, but that money instead gets diverted into legal costs. Comprehensive tort reform that makes frivolous litigation less profitable for trial lawyers would facilitate job creation.

State legislatures can also encourage hiring by rolling back excessive occupational licensing. One in three jobs now require a government license to perform. Some of this licensing makes sense for safety reasons, such as for surgeons and pharmacists. But states also license many jobs with few safety risks, such as barbers.

The training requirements and fees necessary to get a license lock many workers out of jobs they could excel at. Eliminating these barriers would make it easier for the unemployed to find new work.