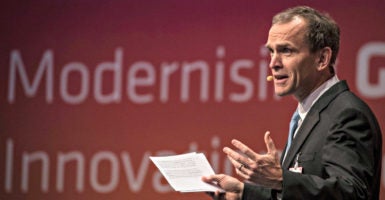 Democratic governments and communications companies should work together to simplify data access processes while protecting privacy rights on the internet, Kent Walker said in a speech at The Heritage Foundation.

Walker, senior vice president and general counsel at Google, described the current system as one that “fails to protect privacy and impedes legitimate investigations.”

“It’s time to lay a new foundation and establish a new legal framework for the cloud,” Walker said in the June 22 speech.

The New York Times billed Walker’s speech at Heritage as Google’s announcement of the digital infrastructure that the multinational technology giant hopes U.S. lawmakers will adopt.

Under legal provisions such as the federal Electronic Communications Privacy Act, dating to 1986, foreign countries must funnel requests for personal information about users through the country in which any given company is located.

This would be the case, for instance, if a law enforcement agency in the European Union were trying to learn more about a member of Facebook, a U.S.-based corporation.

Receiving that content takes up to  10 months—a long time in the effective pursuit of criminal cases, Walker said.

As an assistant U.S. attorney in the Justice Department early in his career, he specialized in prosecuting technology crimes.

In an era when law enforcement officials increasingly rely on global companies for information—Google received 75,000 data requests, most of them international, in the second half of 2016 alone—measures like the Electronic Communications Privacy Act hinder efforts to do justice, he said.

The delay in procuring information also causes countries to exert an extraterritorial authority that can jeopardize the privacy rights of anyone who uses Facebook and other social media or does searches on Google, Walker said.

When facing the application of domestic law to international companies and individuals, he said, internet service providers such as Google potentially must violate the laws of either the requesting country or their home country.

And yet, Walker said, “there is a broad set of agreement on basic principles” among democratic nations, such as independent review of requests, “proportionality,” and fact-based reports. From this core notion, the international community can craft new data access standards, he argued.

Primarily, Walker said, democratic governments can ameliorate tensions over timely access by allowing countries committed to baseline privacy, due process, and human rights to directly request data from companies in other democratic countries.

Google has supported the International Communications Privacy Act as a key piece of this framework.

That measure would allow the United States to update its digital access policies and encourage other actors—particularly those, including New Zealand and the European Union, already seeking similar reforms—to implement basic user protections.

Authoritarian nations would be ineligible to participate unless they raised their human rights standards, a mechanism Walker said he believes would incentivize oppressive regimes to join the liberal order.