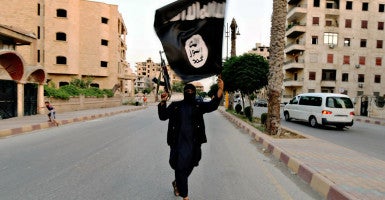 'It’s probably the aspect of the challenge that we have an easier job defeating,' Google Ideas executive Jared Cohen says of ISIS's digital presence. (Photo: Ho/ZumaPress/Newscom)

The Islamic State, or ISIS, isn’t as prevalent on the Internet as many believe, an expert on digital media says, and the United States has the technological capacity to destroy the terror group’s online recruiting efforts.

Compared to defeating the physical presence of ISIS in Iraq and Syria, he says, the digital counterinsurgency is an easier challenge to meet and requires little risk.

Jared Cohen, director of Google Ideas and adjunct senior fellow at the Council on Foreign Relations, argued these points during a lecture at Vanderbilt University earlier this month.

As the first terrorist group to occupy both physical and digital territory, ISIS manipulates an online presence to communicate its message and recruit foreign fighters.

Although ISIS is skilled at marketing on the Web, the armed force isn’t technologically savvy, Cohen said. The U.S. should manipulate this weakness as it forms a strategy to take down the terrorists online, he said.

It’s less understood. In many respects, it’s bigger. But it’s probably the aspect of the challenge that we have an easier job defeating.

Helle Dale, senior fellow for public diplomacy at The Heritage Foundation, told The Daily Signal that she agrees with Cohen and underscored the necessity of stopping the brutal Islamist terrorists online.

“Reducing the potency of ISIS’ poisonous Internet propaganda is critically important for stemming the flow of foreign recruits,” Dale said.

Cohen suggested that despite the terrorist group’s comprehensive social media presence, it’s realistic for the U.S.to destroy it digitally. Specifically, he argued that the objective should be to marginalize the terrorists and push them to the periphery of the Internet.

Cohen advocated a three-point plan. First, he proposes the U.S. cut off the nexuses of influence enjoyed by ISIS. This means using intelligence to discover which digital media accounts belong to members of ISIS and following the subpoena process to get the accounts suspended.

The second facet of Cohen’s plan calls for reducing the terrorist group’s digital activity by diverting potential recruits away from it online.

One way to do this, he said, is by pushing a counter-narrative, similar to targeted online advertising. When a potential recruit uses specific search terms on Google such as “how to join ISIS,” the U.S. can target ads on search engines to convince the prospect not to sign up.

The more effective way to do this, Cohen argues, is by injecting risk. Although it is difficult to change the mind of an extremist who wants to join ISIS, it is easier to scare him or her into submission. Search engines, for instance, can plant ads showing stories of arrests of individuals who were caught trying to travel to Iraq or Syria to commit violent jihad.

The message of the U.S. on the Internet and in the media, Dale added, should be clear: “This is what happens to you if you join ISIS.”

She said: “ISIS propagandists portray the Islamic State as paradise. In reality, it is hell on earth.”

The third and final part of Cohen’s plan is to mobilize and empower the opposition on the Internet, so that someone can fill the vacuum when ISIS no longer can fight effectively in cyberspace.

Because many of these digital techniques require technological expertise that the U.S. government lacks, Cohen said, private companies have an important role to play in the Internet takedown of ISIS.

Additionally, since tech companies value user privacy and security and don’t want fake accounts and Internet trolls, Cohen argued, it is in private corporations’ best interest to stop ISIS from using their resources.

“I find it impossible to believe that we do not ultimately have the edge,” Dale said of marginalizing ISIS on the digital front. “Getting the private sector involved and coordinating with government agencies is a good idea.”

Although stopping ISIS from gaining additional footholds in cyberspace is key to winning the war against radical Islamic terrorism, Dale said, stopping ISIS on a physical level is crucial as well.

“The most powerful tool we have is the U.S. military,” she said.

Cohen believes that ISIS should be defeated online but agrees that the physical fight is key:

This is not to say that the digital war against ISIS is more important than the physical fight. Whenever you’re conducting a counterinsurgency, the physical war is of paramount importance.