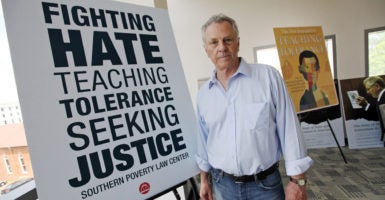 Morris Dees, above, is co-founder and chief trial counsel of the Southern Poverty Law Center. A man who attempted a mass shooting at the Family Research Council in 2012 said he targeted the conservative education organization because SPLC listed it as a “hate group.” (Photo: Robert King/Polaris/Newscom)

Four of the world’s biggest tech platforms have working partnerships with a left-wing nonprofit that has a track record of inaccuracies and routinely labels conservative organizations as “hate groups.”

Facebook, Amazon, Google, and Twitter all work with or consult the Southern Poverty Law Center in policing their platforms for “hate speech” or “hate groups,” a Daily Caller News Foundation investigation found.

The SPLC is on a list of “external experts and organizations” that Facebook works with “to inform our hate speech policies,” Facebook spokeswoman Ruchika Budhraja told The Daily Caller News Foundation in an interview.

Facebook consults the outside organizations when developing changes to hate speech policies, Budhraja said, noting that Facebook representatives will typically hold between one and three meetings with the groups.

The SPLC accused Facebook in a May 8 article of not doing enough to censor “anti-Muslim hate” on the platform. That article did not disclose the SPLC’s working partnership with Facebook.

“We have our own process and our processes are different and I think that’s why we get the criticism [from the SPLC], because organizations that are hate organizations by their standards don’t match ours,” Budhraja said.

“That doesn’t mean that we don’t have a process in place, and that definitely doesn’t mean we want the platform to be a place for hate but we aren’t going to map to the SPLC’s list or process,” she said.

Of the four companies, Amazon gives the SPLC the most direct authority over its platform, The Daily Caller News Foundation found.

While Facebook emphasizes its independence from the SPLC, Amazon does the opposite: Jeff Bezos’ company grants the SPLC broad policing power over the Amazon Smile charitable program, while claiming to remain unbiased.

“We remove organizations that the SPLC deems as ineligible,” an Amazon spokeswoman told The Daily Caller News Foundation.

Amazon grants the SPLC that power “because we don’t want to be biased whatsoever,” said the spokeswoman, who could not say whether Amazon considers the SPLC to be unbiased.

The Smile program allows customers to identify a charity to receive 0.5 percent of the proceeds from their purchases on Amazon. Customers have given more than $8 million to charities through the program since 2013, according to Amazon.

Only one participant in the program, the SPLC, gets to determine which other groups are allowed to join it.

One month later, the anti-Semitic groups—but not the Alliance Defending Freedom—are still able to participate in the program.

Twitter lists the SPLC as a “safety partner” working with Twitter to combat “hateful conduct and harassment.”

The platform also includes the Trust and Safety Council, which “provides input on our safety products, policies, and programs,” according to Twitter. Free speech advocates have criticized it as Orwellian.

A Twitter spokeswoman declined to comment on the SPLC specifically, but said the company is “in regular contact with a wide range of civil society organizations and [nongovernmental organizations].”

The SPLC and other third-party groups in the Trusted Flagger program work closely with YouTube’s employees to crack down on extremist content in two ways, according to YouTube.

First, the flaggers are equipped with digital tools allowing them to mass flag content for review by YouTube personnel. Second, the groups act as guides to YouTube’s content monitors and engineers who design the algorithms policing the video platform, but may lack the expertise needed to tackle a given subject.

The SPLC is one of over 300 government agencies and nongovernmental organizations in the YouTube program, the vast majority of which remain hidden behind confidentiality agreements.

The SPLC has consistently courted controversy in publishing lists of “extremists” and “hate groups.” The nonprofit has been plagued by inaccuracies this year, retracting four articles in March and April alone.

The well-funded nonprofit, which did not return a request for comment, deleted three Russia-related articles in March after challenges to their accuracy followed by legal threats.

The SPLC removed a controversial “anti-Muslim extremist” list in April, after British Muslim reformer Maajid Nawaz threatened to sue over his inclusion on the list. The SPLC had accused the supposed extremists of inciting anti-Muslim hate crimes.

Ali, a victim of female genital mutilation who now advocates against the practice, is an award-winning human rights activist. But according to the SPLC’s since-deleted list, she was an “anti-Muslim extremist.”

Ali criticized Apple CEO Tim Cook in August 2017 for donating to the SPLC, which she described as “an organization that has lost its way, smearing people who are fighting for liberty and turning a blind eye to an ideology and political movement that has much in common with Nazism.”

Dr. Ben Carson, a neurosurgeon who is now the secretary of the Department of Housing and Urban Development, was surprised to find out in February 2015 that the SPLC had placed him on an “extremist watch list” for his conservative beliefs.

“When embracing traditional Christian values is equated to hatred, we are approaching the stage where wrong is called right and right is called wrong. It is important for us to once again advocate true tolerance,” Carson said in response.

“That means being respectful of those with whom we disagree and allowing people to live according to their values without harassment,” he continued. “It is nothing but projectionism when some groups label those who disagree with them as haters.”

Following a backlash, the SPLC apologized and removed him from its list. Carson was on the list for four months before the SPLC removed the “extremist” label.

Floyd Lee Corkins, who attempted a mass shooting at the conservative Family Research Council in 2012, said he chose the organization for his act of violence because the SPLC listed it as a “hate group.”

The SPLC has faced tough criticisms not just from conservatives, but from establishment publications as well.

“At a time when the line between ‘hate group’ and mainstream politics is getting thinner and the need for productive civil discourse is growing more serious, fanning liberal fears, while a great opportunity for the SPLC, might be a problem for the nation,” Ben Schreckinger, now with GQ, wrote in a June 2017 piece for Politico.

The Washington Post’s Megan McArdle, while still at Bloomberg, similarly criticized the SPLC’s flimsy definition of “hate group” in  September 2017. Media outlets who trust the SPLC’s labels, McArdle warned, “will discredit themselves with conservative readers and donors.”