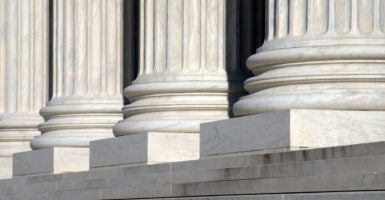 This week, the nation’s highest court made two decisions that could profoundly affect the future of educational freedom in the United States.

On Monday, the Supreme Court ruled in Trinity Lutheran Church of Columbia, Inc. v. Comer that the state of Missouri violated the Constitution when it excluded Trinity Lutheran’s preschool, because of its religious affiliation, from participating in a state-funded playground resurfacing program.

The state of Missouri had used a provision in the state constitution known as a “Blaine Amendment” to deny a grant to the Lutheran preschool to resurface its playground. The state grant program provides grants to nonprofit institutions and schools for resurfacing materials that are made from recycled tires.

Blaine amendments, found today in 37 state constitutions, are named after Sen. James G. Blaine, R-Maine, who in the late 1800s had pushed for an amendment to the Constitution prohibiting aid to “sectarian” schools.

“Consideration of the amendment arose at a time of pervasive hostility to the Catholic Church and to Catholics in general, and it was an open secret that sectarian was code for Catholic,” wrote Justice Clarence Thomas in the 2000 decision Mitchell v. Helms.

Although Blaine failed to amend the Constitution, many states—some on condition of statehood—adopted what became known as Blaine amendments of their own.

Today, these ignoble 19th-century amendments often thwart modern-day school choice efforts as more and more states move toward systems that enable families to direct their child’s education funding to schooling options that work for them.

In Trinity Lutheran, however, the Supreme Court decided that Missouri’s Blaine Amendment was no match for the U.S. Constitution’s Free Exercise Clause, and as such, could not prevent the religious preschool from receiving a grant simply because of its religious identity.

This decision has already had a major impact on broader school choice policy in a group of cases that the court put on hold while it considered Trinity Lutheran.

Then on Tuesday, the high court vacated the Colorado Supreme Court’s decision to strike down the Douglas County Choice Scholarship Program, which provided vouchers to children living in the district to attend a private school of choice.

The justices also sent back a case from New Mexico, where the state’s Blaine Amendment was used to justify excluding religious schools from participating in a textbook lending program. Going forward, the lower courts will have to square their rulings with the Supreme Court’s strong language supporting religious freedom.

Chief Justice John Roberts wrote that excluding Trinity Lutheran from the grant program only because it is a church “is odious to our Constitution … and cannot stand.”

Though the majority opinion included a footnote explaining that Trinity Lutheran did not address “religious uses of funding or other forms of discrimination,” Justice Neil Gorsuch (joined by Thomas) made clear in a concurring opinion that the decision should not be read narrowly to apply only to cases involving playgrounds or children’s health and safety.

Indeed, he concluded, “The general principles here do not permit discrimination against religious exercise—whether on the playground or anywhere else.”

The court’s actions in the Douglas County and New Mexico cases demonstrate that Trinity Lutheran applies broadly as a protection for religious organizations that want to compete on level footing with secular organizations for state funds.

What it means for indirect funding, such as school vouchers, will undoubtedly be hotly debated when the lower courts reconsider these cases. The issue could ultimately be resolved by the Supreme Court in the not-so-distant future.

This very bad week for Blaine could mean a very good century for school choice moving forward. In Mitchell v. Helms, the Supreme Court overruled the logic of Blaine amendments and disavowed their “shameful pedigree.”

This week’s decisions in Trinity Lutheran and the court’s vacating of the decisions in Douglas County and New Mexico punctuate Thomas’ words that “this doctrine, born of bigotry, should be buried now.”

The prospect of a looming demise of Blaine amendments gives life to school choice in states across the country in a new way, and signals the promise of educational freedom and opportunity for millions of children in the years to come.