Missouri Tried to Discriminate Against a Church for No Good Reason. How the Supreme Court Leveled the Playing Field. 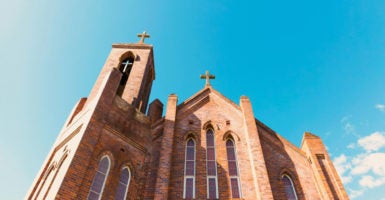 The court ruled that a state cannot deny a public benefit to a qualified organization simply because of its religious character. (Photo: iStock Photos)

In a 7-2 decision on Monday in Trinity Lutheran Church of Columbia, Inc. v. Comer, the Supreme Court overturned a Missouri policy that discriminated against a church simply because of its religious character.

Citing a provision in its constitution that bars aid to religious organizations, Missouri had disqualified Trinity Lutheran Church’s preschool from a competition for recycled tires for playground resurfacing.

Even though the church’s application ranked fifth out of 44 applications on the merits, the preschool was categorically denied the right to compete and did not receive one of the 14 grants that the state ultimately awarded.

The Supreme Court held that Missouri’s policy violated the First Amendment. Writing for the majority, Chief Justice John Roberts announced that “the exclusion of Trinity Lutheran from a public benefit for which it is otherwise qualified, solely because it is a church, is odious to our Constitution all the same, and cannot stand.”

The significance of the court’s decision goes far beyond the playground at Trinity Lutheran.

When the government announces competitive programs to the public, including to improve public health, safety, and security, it must allow religious communities to compete on the basis of merit for those benefits.

It is an unconstitutional violation of religious freedom to pressure religious communities to renounce their beliefs by threatening to exclude them from competition.

All Americans should be able to compete fairly on a level playing field for assistance that will protect citizens’ lives and well-being. No government policy should pressure communities to renounce their beliefs (religious or otherwise) to qualify for such a benefit.

In the years after 9/11, two liberal U.S. senators—Kirsten Gillibrand and Chuck Schumer of New York—argued for such a level playing field on behalf of Jewish institutions applying for federal funds to help them prepare for a terrorist attack.

Schumer explained, “Religious schools and congregations have been previously targeted for attacks and that’s why FEMA’s Nonprofit Security Grant Program is critical in making sure that high-risk organizations are safe and protected from terrorist attacks.”

Gillibrand added, “No New Yorker, or American, should ever have to live and worship in fear of being targeted because of who they are or what they believe.”

The Pennsylvania Safe Schools Act of 2013 provided a targeted grant program to train school resource officers and school police officers. Jewish day school Silver Academy in Harrisburg, Pennsylvania, was one of the recipients—and the protections met a real need.

In the aftermath of a February bomb threat, school official Shari Dymher expressed her gratitude for the funding: “When we had our bomb threat, thank goodness we had that security guard, because we had our complete evacuation in place—all the steps that we follow.”

According to the FBI, in 2015, 19.5 percent of hate crimes in America were aimed at victims because of religious bias, and Jewish people are the most frequently targeted.

As the Union of Orthodox Jewish Congregations stated in its amicus brief in the Trinity Lutheran case, “When it comes to health, safety, security and sustainability, religious institutions deserve the same legislative protections afforded all other institutions.”

In other instances, government has undertaken initiatives to provide for general health and safety. Asbestos abatement in American schools is one example. The tire scrap recycling program for which Trinity Lutheran made application for its playground resurfacing is another.

As the chief justice observed, “Denying a qualified religious entity a public benefit solely because of its religious character … goes too far.”

The Supreme Court took the right steps in Trinity Lutheran to respect free exercise of religion. It recognized that forcing a religious community to choose between its religious beliefs and a government-proffered public benefit is coercive and creates an impermissible burden on Americans’ First Amendment rights.

The court sent a clear message that categorical disqualification because of religious character is unconstitutional and that governments must treat religious groups fairly by allowing them to compete on merit.

By upholding Trinity Lutheran’s right to compete fairly, the Supreme Court leveled the playing field for religious groups to serve the needs of all Americans.