This Judge Is Using a Phone App to Combat Drunk Driving 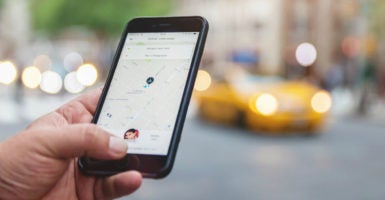 Studies have shown that ride-sharing apps like Uber and Lyft correlate to decreases in drunk driving incidents. (Photo: iStock Photos)

In Ohio, one judge is getting creative in his efforts to cut down on drunk driving.

Municipal Court Judge Michael Cicconetti has begun requiring drunk drivers convicted in his court to install a ride-sharing app on their phones as a part of their terms of probation.

According to Cicconetti, “It’s just common sense. It doesn’t cost anybody anything to install it and activate it, and it’s far cheaper than paying the thousands of dollars you’d have to pay for another [drunk driving conviction].”

It also just might be an idea that saves lives.

In 2015, 10,265 people were killed as a result of impaired driving—that’s nearly one out of every three traffic-related deaths nationwide. According to the Ohio Highway Patrol, Cuyahoga County—home of Cleveland, and near Cicconetti’s Painesville court—has seen its share of alcohol-related fatalities.

When you consider that the average drunk driver operates a vehicle while intoxicated 80 times before his first arrest, it is a miracle that fatalities and injuries are not higher.

Governments and private groups have been trying to solve the problem of drunk driving for almost as long as the automobile has existed.

Now, technology and ingenuity have combined to create ride-sharing services like Lyft and Uber that can give towns and cities a new weapon to combat the plight of intoxicated driving.

Consider when drunk driving most frequently occurs: at night, after a driver has imbibed at a bar or a sporting event, and needs a way to get home.

Downtown in major cities, people have access to public transit—if it isn’t closed. They also have access to taxicabs, again assuming that demand—which often spikes right as bars close—hasn’t outstripped the supply of taxis, which is usually capped by regulation.

Outside of the core of major cities or hot nightlife locales, the availability of public transportation and taxis is often uncertain, or nonexistent. In these situations, people often resort to driving while they are intoxicated.

That lack of options in no way excuses the profoundly stupid decision to get behind the wheel, but it does make clear that one way to reduce drunk driving may be simply to offer people a reliable and inexpensive alternative.

Studies indicate that Uber, Lyft, and other ride-sharing platforms may be able to do just that.

One report conducted at the City University of New York earlier this year concluded that Uber’s introduction in New York City in 2011 “decreased the alcohol-related collision rate by 25 to 35 percent in affected counties.”

This equates to about 40 fewer alcohol-related collisions per month.

In January 2015, Mothers Against Drunk Driving (MADD) and Uber Technologies, Inc. released a joint report that correlated a 10 percent reduction in DUI arrests with the rollout of Uber service in Seattle.

It also found that in cities where Uber operates, such as Pittsburgh and Miami, there is a significant spike in the number of ride requests that aligns exactly with the legal closing times for bars on weekends.

In a poll conducted as part of that report, 57 percent of respondents said that they would drive drunk were it not for the availability of Uber, while 78 percent indicated that their friends were less likely to drive after drinking thanks to ride-sharing.

Not every study has been so bullish about Uber and Lyft decreasing drunk driving, though.

One published in the American Journal of Epidemiology concluded that, while “in smaller areas where transportation options are limited,” Uber and Lyft may have an effect on DUI-related incidents, overall there is “no association with traffic fatalities because [ride-sharing] represents a relatively small share of transportation usage in the United States.”

In other words, Uber has given those already inclined to avoid DUIs additional options, but has not yet convinced drunk drivers to put away the keys in lieu of using app-based platforms.

If this is the case, having a judge like Cicconetti order a convicted drunk driver to download and install the Uber or Lyft app may be just the sort of nudge needed to encourage them to view these services as a go-to when imbibing.

Ordering the installation of an app is certainly novel in the field of DUI sentences. Judges generally have discretion in sentencing and setting terms of probation.

Ohio law, for example, establishes that in DUI cases, “the court may also impose on the offender any other conditions of community control that it considers necessary.”

Treating this as a learning opportunity rather than a court order to do business with a certain company, though, is wise. After all, whether an intoxicated rider takes an Uber or a taxi, the roads are safer as a result.

Clearly, ride-sharing has a role to play in improving transportation safety, particularly in areas where few alternatives to drunk driving exist. Nevertheless, these services are still contending with hostile city governments eager to adopt anti-ride-sharing regulations.

The Austin City Council recently drove Uber and Lyft out of the city, prompting the Texas Legislature to intervene. New York City has tried repeatedly to heavily regulate ride-shares, even blaming them for endemic problems like congestion to justify efforts at heavy-handed regulation.

There is a confusing paradox here. Cities adopt anticompetitive and protectionist regulations in the name of preserving public safety, yet in doing so regulators and lawmakers are closing the door to a potential tool that could improve safety on the roads and in their communities.

Ride-sharing will not be a silver bullet in the fight to end drunk driving. But, as ride-sharing services grow in size, and expand to areas where few reliable alternatives to driving exist, they can be a tool to combat the problem.

With so much on the line, we need all the help we can get.